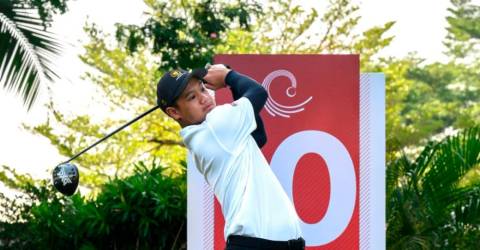 CHONBURI: Australia’s Harrison Crowe fired a superb third round of five-under-par 67 to take the lead heading into the final day of the 13th Asia-Pacific Amateur Championship (AAC) at Amata Spring Country Club.

Pre-tournament favorite and local hero Ratchanon ‘TK’ Chantananuwat struggled with physical problems for the second straight day en route to a round of 76, dropping down the standings into T19 place on five-under-par 211 (67-68-76). Having played with a sprained neck and back in the second round, the 15-year-old pulled a leg muscle while trying to play a difficult shot on the 12th hole, and suffered a nose bleed coming in.

Among the three Malaysians who made the halfway cut, Anson Yeo is the best-placed after grinding out an even-par 72 in hot and windy conditions. The 16-year-old lies in joint 33rd spot on two-under-par 214 (71-71-72).

“It was hot and windy today and I struggled a little with my putting – I had three three-putts! I started well and was two-under-par after my first four holes, and then I made two bogeys in a row. Some of the pin positions were tough today,” said Yeo, who attended the AAC Academy clinic at Amata Spring in early September.

Asked about his game plan going into the final round, Yeo noted that he will continue to play aggressively and “go for it.”

The second best-placed Malaysian is Zubair Firdaus, who showed great course management in the tough conditions to sign in a one-under-par 71. The 20-year-old is one shot behind Yeo in 35th place on one-under-par 215 (71-73-71).

“It was very windy today, so I had to hit a lot of low, controlled shots out there. The greens were a little bit faster and the pin positions on almost every hole were tucked in a corner,” said Zubair, who is in his sophomore year at San Jose State University in California.

“Luckily I’m familiar with tucked pins because in college golf in the US we play a lot of pins that are very tight, and we work a lot on course management. I’m very excited about the final round – one-under-par is my best round here so far, so hopefully I can go lower,” he added.

Isaac To meanwhile had a tough time out on the challenging Amata Spring layout, falling down the leaderboard after a third round 81, which is 12 shots higher than his second round score. The 18-year-old Malaysian is in 52nd spot on six-over-par 222 (72-69-81).

“I had a bad start and I just kept compounding error after error. I didn’t really gauge the wind well and should have played more conservatively. Also, in the end I didn’t putt well,” said a visibly disappointed To.

However, the resilient teen is taking it all in his stride. “It was a tough day out there but it was a good learning experience, a humbling moment,” noted the Missouri University of Science and Technology freshman.

Yeo, Zubair and To are all making their debuts in the prestigious championship and form part of a record seven-strong Malaysian contingent. Fellow debutante Hariz Hezri, Marcus Lim and Nateeshvar Ganesh had failed to make the halfway cut, while Khavish Varadan was forced to withdraw when he aggravated a chronic neck injury during the second round.

Khavish, Lim and Nateeshvar were making their second successive appearances in the AAC, having played in the 12th edition at Dubai Creek Golf & Yacht Club last year. Khavish was the only one who made the cut then, finishing T18 on five-under-par.

Malaysia’s best result in the AAC is seventh, achieved by Mohd Iszaimi Ismail during the inaugural event in 2009 at Mission Hills Golf Club in China and matched by Ervin Chang in 2018 at Sentosa Golf Club in Singapore.

For more information about the AAC, please visit AACgolf.com .