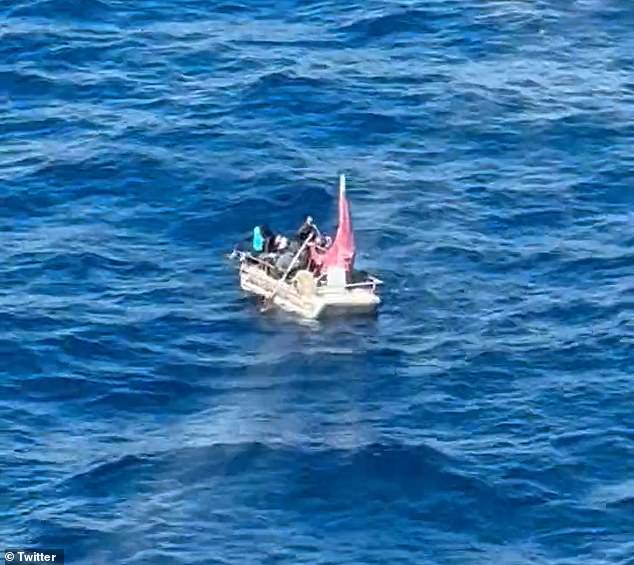 Two cruise ships rescued groups of Cuban migrants who were lost at sea on Monday.

Footage recorded by a passenger aboard the Carnival Celebration showed five migrants stranded aboard a small makeshift vessel powered by a single engine 25 nautical miles northwest of Cuba on Monday at around 11am.

The ocean liner ship sailed towards the migrants as crew helped them aboard, according to Miami ABC affiliate WPLG.

The group were navigating towards the United States and had gone several days without food or water.

Five migrants were rescued by a Carnival Cruise ship on Monday about 25 nautical miles off northwest Cuba. The individuals, all natives of the communist island, had been lost at sea for several days before they were spotted by the ocean liner and brought on board 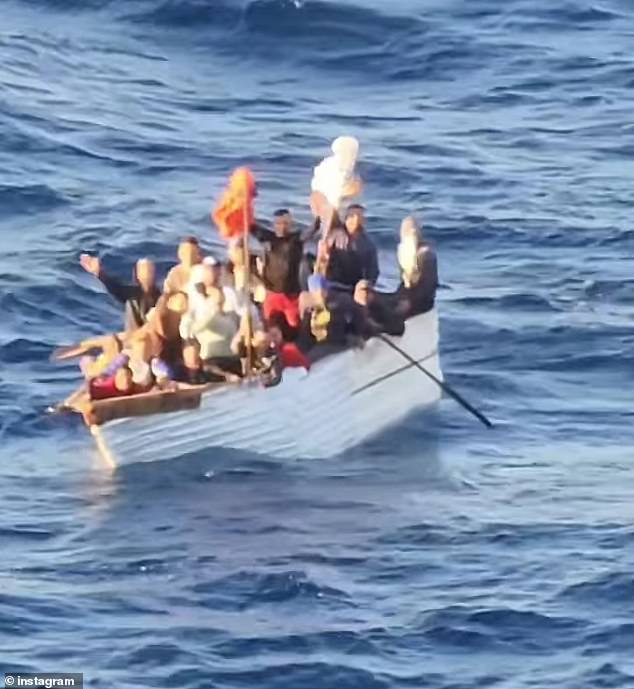 On Monday, the Celebrity Cruises ship, Celebrity Beyond, came across a wooden vessel with 19 migrants lost at sea about 200 miles off the coast of Fort Lauderdale, Florida

Olivia O’Brien, a passenger on board the Celebration, said the ship spun around in the sea to pick up the migrants.

‘It was pretty cool to see,’ she said.

The migrants were turned over to the U.S. Coast Guard for processing.

In a separate incident, the crew aboard the Celebrities Cruises ship rescued 19 migrants who were headed to Florida in a wooden raft.

The Celebrity Beyond was about 200 miles off the Fort Lauderdale coast when it encountered the boat. 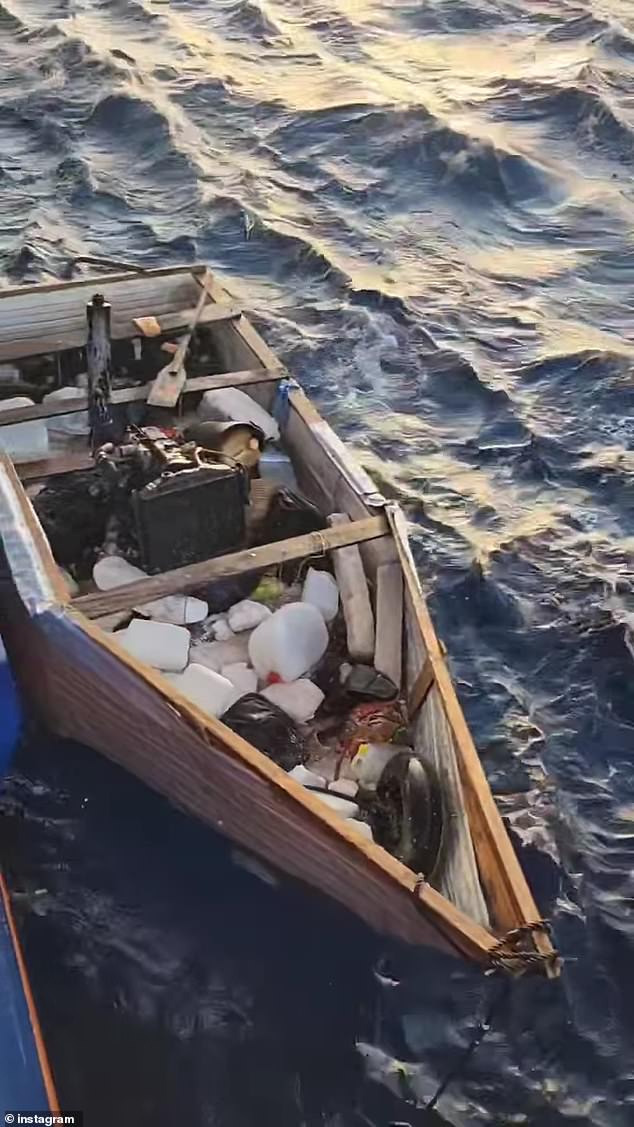 A raft constructed out of wood is tied to the Celebrity Beyond cruise ship after 19 migrants were spotted lost at sea about 200 miles off the coast of Fort Lauderdale, Florida, on Monday 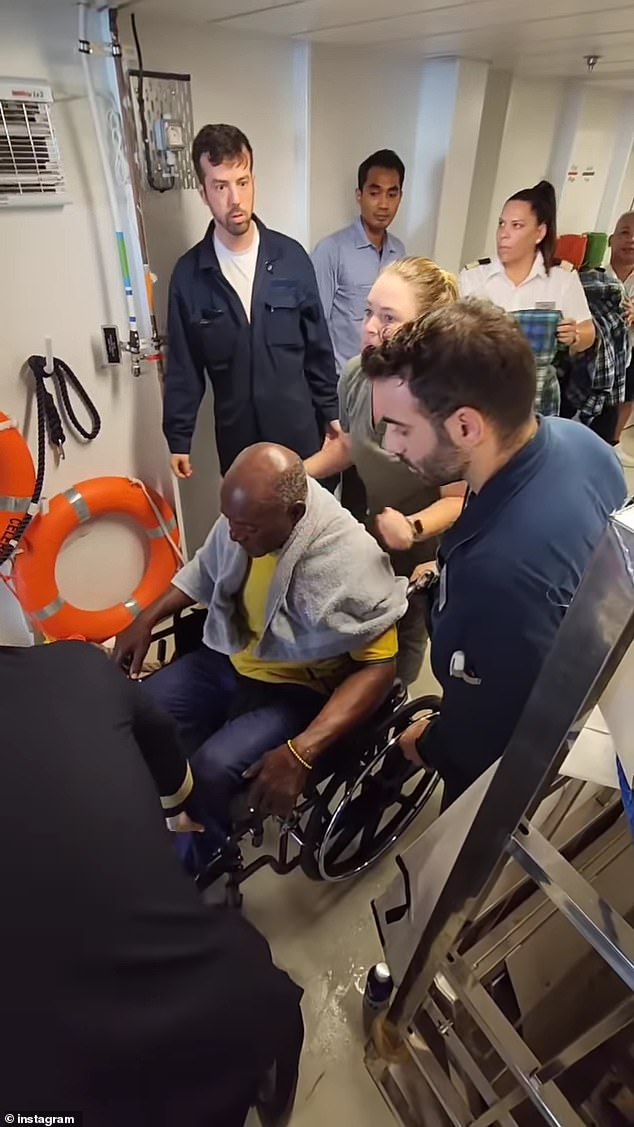 The migrants were helped on to the ship and given blankets before they were escorted to another area of the liner.

A U.S. Coast Guard spokesperson told DailyMail.com the agency was still working on identifying the migrants.

The rescues come on the heels of the massive arrival of migrants in the Florida Keys over the last couple of days, which have drained the resources of the Monroe County Sheriff’s Office.

During the weekend, 300 migrants reached the shores of Dry Tortugas National Park, about 70 miles west of Key West. Access to the park was shut down so that authorities and paramedics could evaluate the migrants before moving them to Key West. 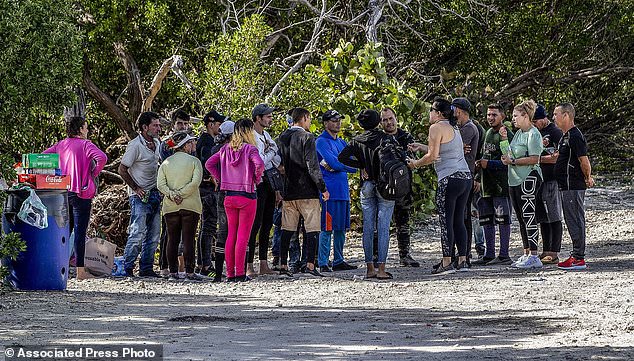 A group of Cuban migrants stand in the sun on the side of U.S. Highway 1 in the Middle Keys island of Duck Key, Florida, on Monday 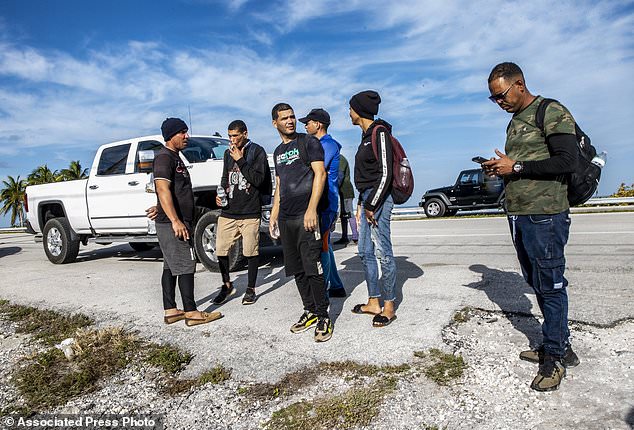 A group of Cuban migrants stand in the sun on the side of U.S. Highway 1 in the Middle Keys Island of Duck Key, Florida, on Monday

In another migrant smuggling incident, 160 individuals arrived by boats in other parts of the Florida Keys over New Year’s weekend. On Monday, around 30 people in two new groups of migrants were found in the Middle Keys.

‘This shows a lack of a working plan by the federal government to deal with a mass migration issue that was foreseeable,’ Monroe County Sheriff Rick Ramsay said Monday in a news release.

U.S. Border Patrol and Coast Guard crews patrolling South Florida and the Keys have been experiencing the largest escalation of migrations by boat in nearly a decade, with hundreds of interceptions in recent months.

Most of the migrants are from Cuba and Haiti and are escaping economic turmoil, food shortages and soaring inflation.