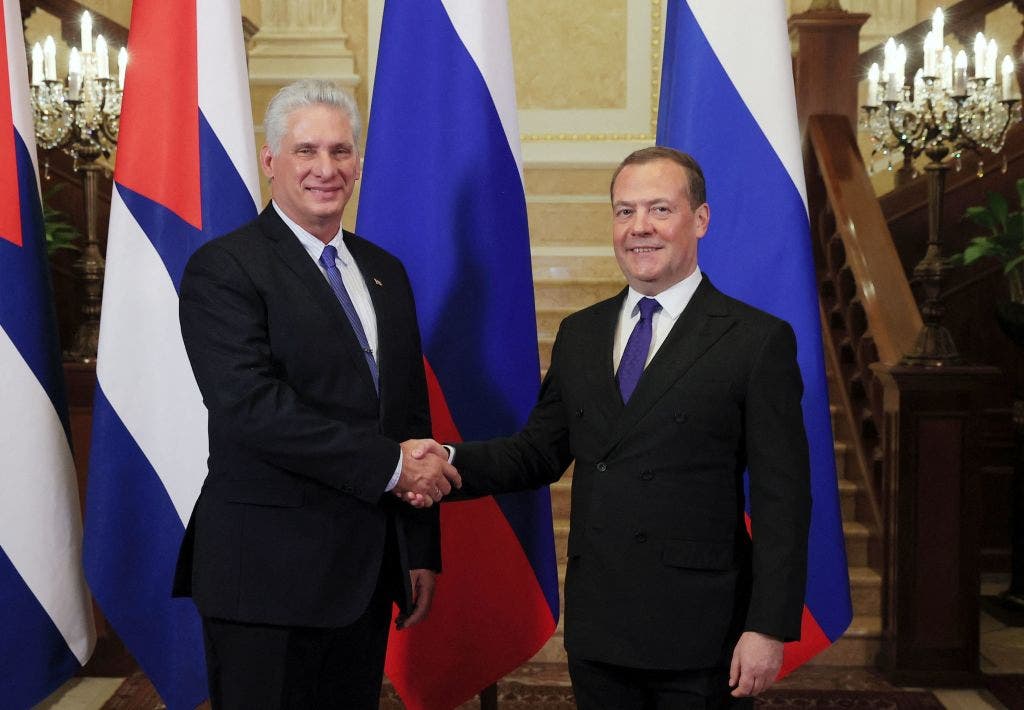 Cuban President Miguel Diaz-Canel traveled to Russia this week under the auspices of an official state visit, where he will attend the unveiling of a statue of Fidel Castro at the Sokol metro station in northwestern Moscow.

Russian President Vladimir Putin has lavished hundreds of thousands of barrels of oil on the island nation, and Cuba in return has installed Russian intelligence at the infamous Lourdes SIGINT (signals intelligence) station near Havana, where it actively monitors U.S. communications.

WHAT IS PUTIN THINKING? WHERE THE RUSSIA-UKRAINE WAR STANDS NINE MONTHS AFTER INVASION

Despite Cuba’s dismal economic outlook, Russia appears happy to extend repeated financial lifelines to the Caribbean Island in exchange for a bolstered geopolitical and military presence a mere 150 miles from U.S. shores. At a time when Russia is imperiled as never before in the post-Cold War era, its commitment of critical resources demonstrates the value it places on Cuba, which many scholars believe to be the command center in the “long game” Russia is seeking to play as it battles for hearts and minds in the Latin American region.

Rep. Maria Elvira Salazar, R-Fla., told Fox News Digital that “The Cuban regime has struggled to stay relevant after their financial enablers in the Soviet Union stopped sending them money in the 1990s,” yet with renewed ties they receive “military equipment and intelligence from Russia…the Cuban regime benefits because it can further sustain itself with Russian blood money. Communism only works with other peoples’ money.”

“Russia is probably considering deployment of military assets and personnel into Cuba to show Washington that it can mess in its backyard, too — all part of the plan to put pressure on the Biden administration to abandon support of Ukraine. Obviously, Putin would need Diaz-Canel’s consent for that.”

“Putin is maybe hoping to get permission to deploy nuclear-capable assets on the island as Moscow fears NATO’s intervention in the Russia-Ukraine war. This is meant as a deterrent but would likely be perceived by Washington as escalatory,” Koffler said.

Diaz-Canel’s visit demonstrates that Cuba remains firmly in the Russian geopolitical orbit, with ties between the two nations arguably closer than at any time since the end of the Cold War.

The late Cuban leader, Fidel Castro, meets with Russian President Vladimir Putin in Havana, Cuba, during a visit by the Russian president in 2014. (AP Photo/Alex Castro)

MORE CUBANS IMMIGRATING TO THE US BY CROSSING FROM MEXICO

As Koffler notes, “On Jan. 24, one month prior to the so called ‘special operation’ (the Russian invasion of Ukraine), the Cuban and Russian presidents had a ‘friendly and productive phone call’ during which they discussed their ‘strategic partnership’ … less than a week prior to the invasion, Russia’s Deputy Prime Minister Yury Borisov visited Cuba, Nicaragua and Venezuela, key Russian allies in Latin America, to secure support.”

Despite the close relationship, Cuba and other Latin American allies like Venezuela and Bolivia surprised the world when they abstained from a U.N. vote to condemn the Russia invasion of Ukraine earlier this year and a subsequent vote on Oct. 12 regarding Russian annexation of Ukrainian territory.

Koffler believes that this decision is tied to Cuba maximizing its economic standing with its historical benefactor.

“Cuba didn’t overtly vote in support of Russia, probably because it wants some negotiating leverage over Moscow. Havana likely hopes that Moscow will forgive some of its loans and get preferential terms for trade. In 2014, Moscow wrote off $32 billion of Cuba’s outstanding debt. Havana probably hopes for more debt forgiveness by Moscow.”

Russia and China, while sharing a hearty interest in the region, take vastly different approaches to Latin America. While China has largely confined its interests to ensuring a return on its economic investments, Russia, in a return to a Cold War-mentality, has made substantial political investments in ensuring the stability and longevity of its authoritarian allies, as well as bolstering anti-American movements and sentiments.

The renewed use of the Lourdes SIGINT facility, whereby it actively monitors U.S. communications, is a key component of Russia’s long-game strategy in the region, which primarily consists of antagonizing the United States.

Yet, given Cuba’s history of aggressive military interventions around the globe, military involvement on the part of Cuba in Ukraine is not beyond the realm of possibility. Last week, popular state television host Vladimir Solovyov called for the formation of international brigades to come to Russia’s aid.

“I don’t understand why Americans, even if they’re fighting in Grenada, always improvise an international coalition. … Why do we deny ourselves that pleasure? There are units in Syria very well trained by us, there are people in Africa who support us, there is Venezuela, there is Nicaragua, Cuba, Iran and North Korea.”

Citing the example of foreign volunteerism during the Spanish Civil War, he added, “If volunteers from all over the world go and fight in Donetsk, why shouldn’t we give them the opportunity to organize and create an international body?”

Yet, Koffler deems this possibility as remote.

“I don’t see this as likely, but we cannot completely rule it out, at least, on a coercive basis rather than voluntarily,” she said. “Solovyov is one of the Kremlin’s top propagandists and most of his rhetoric is intended to frighten the West and to galvanize ultra-nationalist sentiments within Russia. While we can’t completely dismiss what he says, we always need to take his rants with a grain of salt.”