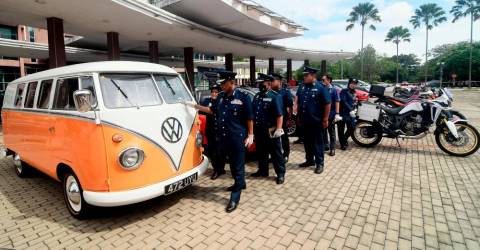 PULAU INDAH: The Royal Malaysian Customs Department (JKDM) has seized a total of 50 luxury cars that did not have approved permits (APs) with a value of RM11.4 million including unpaid duties.

He said all the vehicles were seized through Op Bearing, being held from Aug 15 till tomorrow and focusing on imported vehicles of individuals and companies around Port Klang.

Mohammad Sabri said so far, no arrests have been made.

“Nine of the 50 vehicles are high-powered motorcycles whereas the others are luxury cars from various countries such as the United States, United Kingdom and Japan.

“The (import) of all of these vehicles falls under an offence under Section 135 (1) (a) of the Customs Act 1957 for importing prohibited goods under Item 3, Second Schedule/Part 1, Customs (Prohibition on Import) Order 2017 whose import permit is allowed subject to approved permits issued by the Ministry of International Trade and Industry,“ he said in a press conference at Wisma Kastam here today.

Mohammad Sabri also urged the public to assist the department by channelling information related to any smuggling activities by calling the toll-free line at 1-800-88-8855 or contacting its nearest office.-Bernama