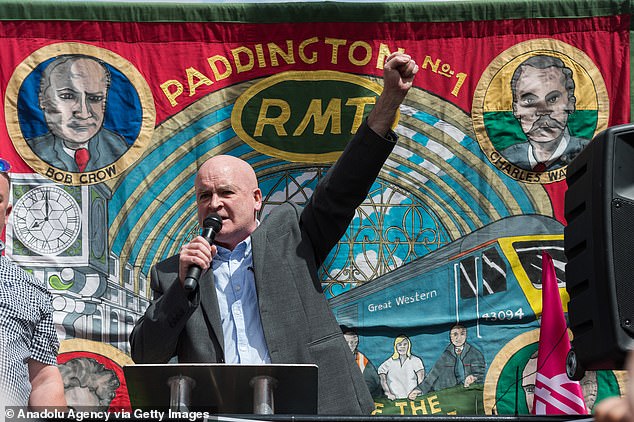 DAILY MAIL COMMENT: Spiralling wages will make us all poorer

Spiralling wages will make us all poorer

It’s half a century since this country experienced the depressing and economically debilitating folly of inflationary wage spirals. But the fundamentals haven’t changed a bit.

It’s such an obvious equation that it shouldn’t need explaining. Yet the unions, spearheaded by the hard-Left RMT, are determined to drag us back on to that insane 1970s merry-go-round.

‘RMT leader Mick Lynch (pictured) claims to be defending workers’ rights. In fact, he’s pitting one set of workers (his members) against another (the rest of the working population)’

There is even talk of general strikes as part of a concerted plan to bring down the Government. It didn’t work against Margaret Thatcher, when union membership was much larger. And as long as ministers stand firm, it won’t work this time.

However, public sector strikes do endanger livelihoods and subject the general public to huge pain and inconvenience.

RMT leader Mick Lynch claims to be defending workers’ rights. In fact, he’s pitting one set of workers (his members) against another (the rest of the working population). The fact that so many prominent Labour figures stand with him on picket lines shows they agree with his spiteful and irresponsible campaign.

To turn Jeremy Corbyn’s favourite mantra on its head, they are standing with the few against the many. Heaven help us if they ever claw their way into government.

Simon Clarke, chief secretary to the Treasury, warned that as well as being ‘selfish’, the unions are acting against the long-term interests of their own members by fuelling inflation.

Granting ‘wildly excessive’ public sector pay claims would hit everyone in their pockets. It would also mean less money for public services and torpedo recovery.

The truth is that the unions are on the wrong side of the moral and the economic argument on this issue. If they insist on remaining deaf to all offers of a negotiated settlement, they must be faced down.

The price of freedom

After the shelling of civilians in Kyiv over the weekend, Russian missiles have now smashed into a shopping centre in the city of Kremenchuk with 1,000 people inside.

Ironically, these war crimes have helped Boris Johnson in his efforts to galvanise the free world in support of Ukraine against Putin. He had earlier warned of compassion ‘fatigue’. But these new atrocities appear to have stiffened the G7’s resolve.

At their Bavaria summit, its leaders have pledged to back Ukraine with financial and military support ‘for as long as it takes’.

This is a significant diplomatic victory for the PM, who stood resolutely behind Ukraine from the start, while others – notably France and Germany – wavered.

He acknowledged that the conflict’s inflationary effects were having a massive negative impact but reminded us that ‘the price of freedom is worth paying’.

We can only hope that message gets through to those Tory MPs who, instead of rallying behind their leader in these perilous times, are arrogantly plotting to bring him down.