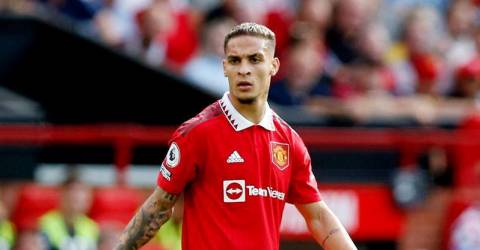 MANCHESTER UNITED winger Antony will get better as he adapts to life at the club after the Brazil international hit the ground running by scoring in the 3-1 Premier League win over Arsenal last weekend, his team mate Diogo Dalot said on Wednesday.

Antony scored on his debut just days after joining the side from Ajax Amsterdam and Dalot said he was not surprised with the 22-year-old’s immediate impact.

“It will take time for us to adapt to each other, but he adapted really quickly,“ Dalot told reporters ahead of their Europa League opener against Real Sociedad on Thursday.

“He’s a very good kid, he’s very open to get help and he will adapt quickly. Everyone has welcomed him and I’m sure he will be successful.”

Manager Erik Ten Hag has kept faith with Scott McTominay in midfield despite the arrival of the experienced Casemiro from Real Madrid and the Dutch manager said he was happy to have depth in his squad.

“When the team is acting well, we have more than 11 players, then you stay in,“ Ten Hag said.

Striker Marcus Rashford has struck form in their run of four straight league wins with three goals and two assists and Ten Hag said he was delighted to see the England man play with a smile again.

“What I see is a happy Marcus Rashford,“ Ten Hag said. “We worked really hard in the last two months with him on different aspects. He likes it, he wants to transfer it to the pitch.

“It started with happiness, he comes in every day, he enjoys it, he’s smiling, a really positive vibe, and if you put all of those things together — like the way of play — and you are happy, you will contribute more to the team.”

Anthony Martial will miss the Sociedad game with an Achilles injury while fellow forward Cristiano Ronaldo could start. – Reuters