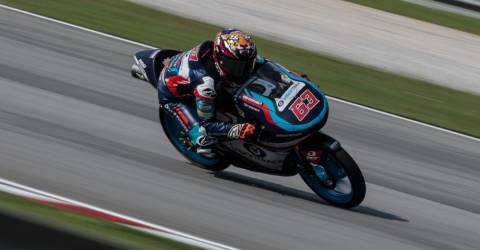 SEPANG: Malaysian wildcard Syarifuddin Azman, or known to his peers as Damok, will be hoping for a wet race to attempt a podium finish during the Malaysian Motorcycle Grand Prix 2022 (MotoGP) at the Sepang International Circuit (SIC) tomorrow.

Damok told reporters after the qualifying session that though the weather has been very good during free practice and qualifying sessions, he felt the setup of his bike would be better suited for wet conditions and that would give him a better opportunity to finish among the top three in the Moto3 race.

“Of course I want to set the best race lap record, in Sepang you can overtake at turn 4, turn 9 and the last corner as all vehicle speeds will be the same, the difference is in the braking, so I need to focus more there,” said Damok, who will be starting in 21st position after recording a time of 2:13.091s in the 1st qualifying session today.

Although he did not perform well during the qualifying session due to some issues with his machine that hampered his rhythm, he remained optimistic and highly motivated to put on his best in front of his own fans.

Meanwhile, Italian racer Dennis Foggia from Leopard Racing will be starting in pole position after setting the all time lap record of 2:11.411s, beating the previous record of 2:11.673s set by Tatsuki Suzuki in 2019.