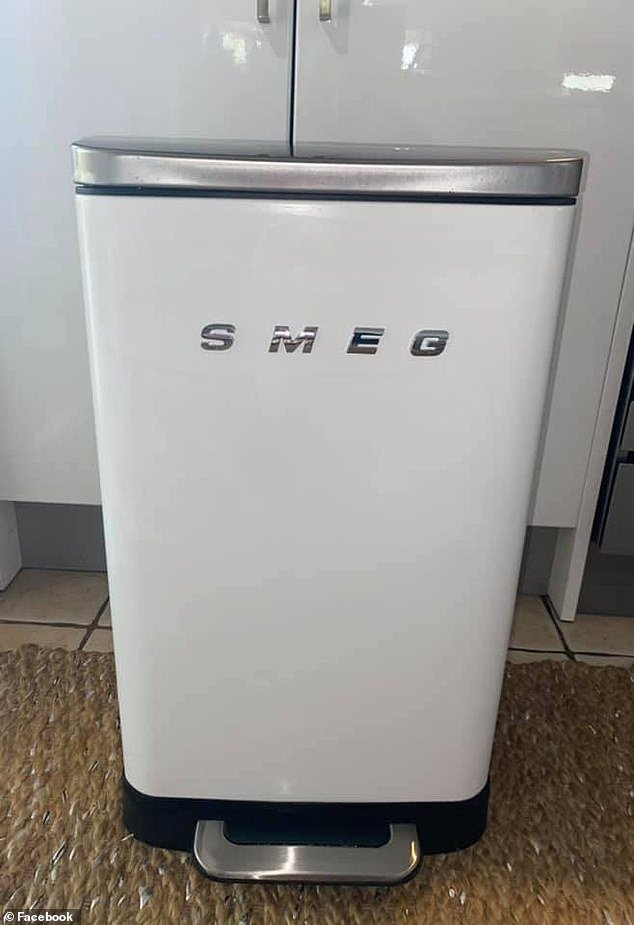 
An Australian woman has revealed how she turned a cheap Kmart bin into a fake Smeg appliance – fooling her mum who loves to collect the designer kitchen appliances.

The woman posted the bin on Facebook explaining how her mum ‘loves all things Smeg’.

‘I thought I’d try one up her and have a ‘Smeg’ product she doesn’t,’ she said.

She then set the bin up in her kitchen and waited for her mum to notice it.

And it was worth the effort the poster went to.

She said her mum was instantly in love with the bin and wanted to know where she had bought it, presumably so she could buy one too.

‘It was the best I laughed harder than I should have. I fessed up later and told her what I did,’ the woman revealed.

And pranksters on Facebook appreciated the joke adding it will probably make her want a real Smeg bin.

‘Oh people that are brand and logo obsessed annoy me so much. I would totally do this,’ one woman said.

Would you transform your Kmart bin into a fake Smeg?

Another woman said the gentle prank was her favourite hack so far while others labelled it simply brilliant.

‘That shows how clever you are. A Kmart bin turned into a $300 bin using four letters, genius,’ another said.

And others didn’t care if the bin was a joke, they wanted one.

‘Do those bins come in different colours? All my Smeg is powder blue,’ one woman said.

Others remarked on how real the bin looks and called it a rich girl bin.

The company is known for its 50s style range which comes in a range of popular colours including candy red and pastel pink.

Bins with a similar aesthetic to Smeg’s 50s range retail for $349.