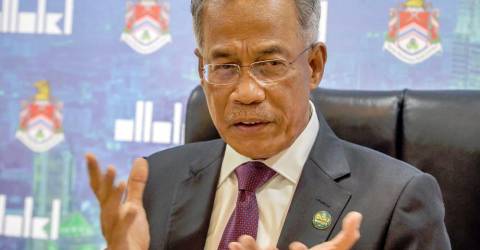 KUALA LUMPUR: The Kuala Lumpur City Hall (DBKL) has allocated RM2.6 billion for its 2023 Budget for the implementation of various initiatives for the well-being of the city dwellers.

Themed “Bandar Raya Mampan, Sejahtera Bersama”, the amount was a decrease of 3.7 per cent from the budget for this year which allocated RM2.7 billion.

Kuala Lumpur mayor Datuk Seri Mahadi Che Ngah (pix) said through the budget, RM1.96 bilion or 75.3 per cent had been set aside for operating expenditure and RM643.7 (24.7 per cent) for city development.

“The welfare and well-being of Kuala Lumpur residents is DBKL’s priority. Every programme is implemented for the benefit of the city dwellers,” he said during a press conference here today.

To address climate change, Mahadi said some RM7 million was set aside to conduct a study on the use of green infrastructure such as the district cooling system (DCS) to reduce carbon emissions.

Mahadi said a total of RM28.4 million was allocated to implement flood mitigation projects and to improve the drainage system in the federal capital.

“DBKL will also apply additional allocation (around RM500 million) from the Federal Government to implement flood mitigation projects,” he said.

He said RM2.9 million had been set aside to promote tourism products in Kuala Lumpur and to organise the Accessible Mayor Awards ceremony for tourism industry players.

“DBKL also plans to establish a Tourism Council that will involve government agencies, non-governmental organisations and tourism industry players in Kuala Lumpur to plan and implement initiatives to boost the tourism sector,” he said. – Bernama