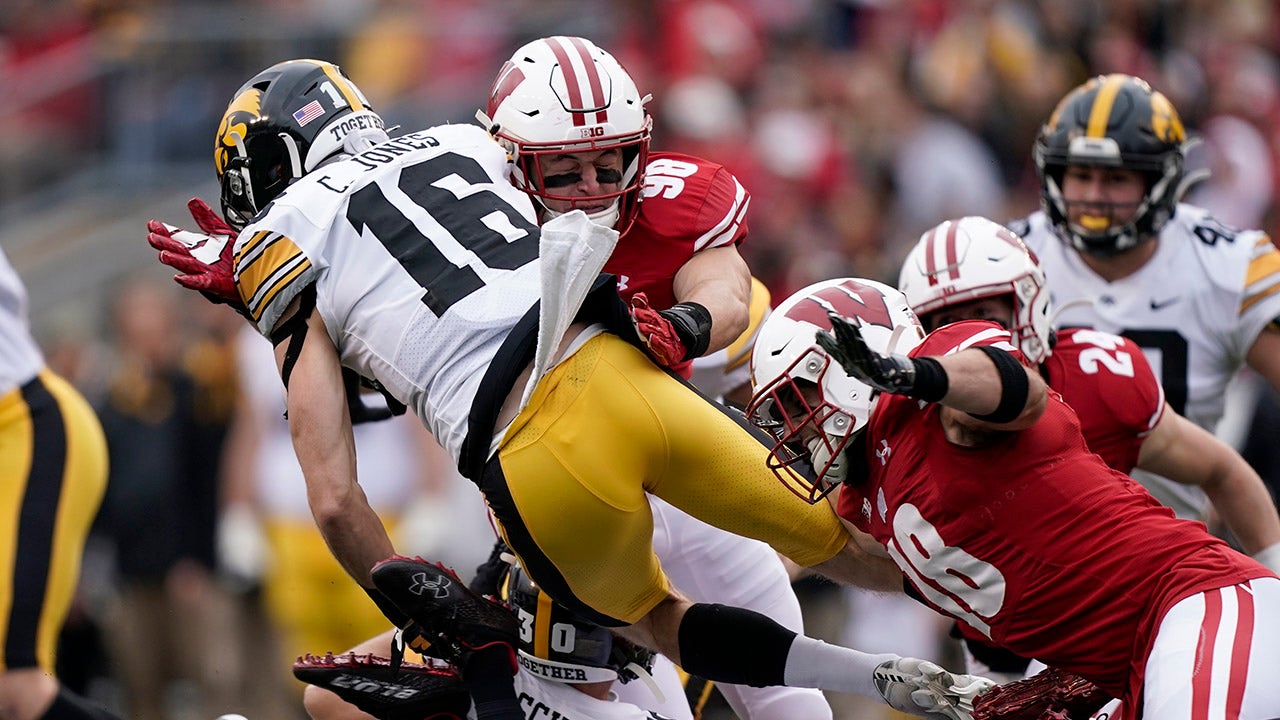 Graham Mertz scored on two quarterback sneaks and threw a touchdown pass to help Wisconsin trounce No. 9 Iowa 27-7 on Saturday for its fourth consecutive victory.

Wisconsin (5-3, 3-2 Big Ten) forced three turnovers, produced six sacks and limited Iowa to 24 yards rushing on 30 carries. The Badgers maintained control of their destiny in the Big Ten West Division race and regained possession of the Heartland Trophy that goes to the winner of this annual matchup.

Iowa’s net yardage total didn’t get into positive territory for good until midway through the second quarter when the Hawkeyes already trailed 17-0. Iowa didn’t pick up a first down until just 1:15 remained in the second quarter.

Wisconsin’s Braelon Allen rushed for 104 yards on 20 attempts The 17-year-old freshman has run for over 100 yards in four straight games after totaling just 12 carries in Wisconsin’s first four games.

The Badgers built a 20-0 halftime lead as Iowa fumbled three times inside its own 20-yard line in the second quarter, leading to 10 points for the Badgers. Iowa was ranked third and Wisconsin tied for 124th among all Football Bowl Subdivision teams in turnover margin before Saturday’s game.

Iowa got back in the game early in the third quarter as Spencer Petras scored from 1 yard out on a quarterback sneak. Iowa advanced to Wisconsin territory on its next possession, but Scott Nelson and Jack Sanborn stopped fullback Monte Pottebaum for no gain on fourth-and-1 from the 40.

Mertz went 11 of 22 for 104 yards. He threw a 4-yard touchdown pass to tight end Jake Ferguson late in the first quarter to put Wisconsin ahead for good.

Wisconsin already led 10-0 before Iowa dug itself a deeper hole with its flurry of turnovers.

The first came when Nick Herbig sacked Petras and forced a fumble that Keeanu Benton recovered at the Iowa 8. Iowa’s defense responded with a goal-line stand as Seth Benson and Jack Campbell stuffed fullback John Chenal on fourth-and-goal from the 1.

Iowa gave the ball right back as Ivory Kelly-Martin mishandled a handoff and Noah Burks recovered the fumble at the 1. One play later, Mertz scored.

Later in the second quarter, Iowa fumbled again when punt returner Max Cooper had the ball bounce off his chest. Wisconsin’s Travian Blaylock recovered at the 18 to set up Collin Larsh’s 32-yard field goal.

Wisconsin tight end Clay Cundiff was carted off the field in an ambulance with his leg in an air cast after he got hurt in the closing seconds of the third quarter. His teammates gathered around him to offer support before the ambulance took him away.

Cundiff gave a thumbs-up to a cheering crowd as he went into the ambulance.

Iowa: The Hawkeyes simply don’t have enough firepower on offense to survive the mistakes they made in the second quarter. Iowa would have lost by an even greater margin if the Hawkeyes hadn’t played such strong red-zone defense.

Wisconsin: A defense that has been exceptional all year is better than ever now that the Badgers are forcing turnovers. After getting just four takeaways in their first six games, the Badgers have eight in their last two games. … The Badgers were missing usual starting left guard Josh Seltzner. Michael Furtney started in his place.

Iowa obviously will fall out of the top 10 and could plunge all the way into the 20s after a second straight loss.

Iowa: At Northwestern on Saturday.

Wisconsin: At Rutgers on Saturday.