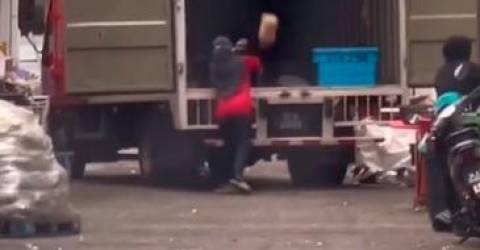 ONE of the more memorable incidents during the MCO was a viral video of delivery workers behaving badly by throwing customers’ packages around and generally manhandling them. Well, it appears that they are back at it again.

In the video which was posted on TikTok by the user @ameir_zainal, a group of delivery company workers were caught playing an impromptu game of catch, flinging parcels and boxes into the back of a delivery van.

One worker could be seen throwing packages towards another worker, who then tossed them into the back of the van. A few of the unfortunate packages thrown by the first worker missed and fell to the ground, which the second worker then collected and threw them into the van without checking their condition.

If the contents of these packages wasn’t damaged by the fall, then the final throw would definitely “do the job”.

On TikTok, the video has been played 1.5 million times, and TikTok users were appalled at the unethical behaviour of the workers.

One user pointed he believed “only male workers did this”, but this video – showing a group of all-female workers – proved him wrong.

Another user joked – at least, we hope they were joking – “Hancur biskut raya aku tahun ini (My Raya biscuits are going to be destroyed this year)”.

Meanwhile on Reddit, one user said: “The amount of packaging material some sellers put in their parcels is comically wasteful. But you see this and understand why they do it.”

We hope that the company involved addresses the problem immediately, and that all other delivery companies ensure that their employees treat their customers’ packages with care.