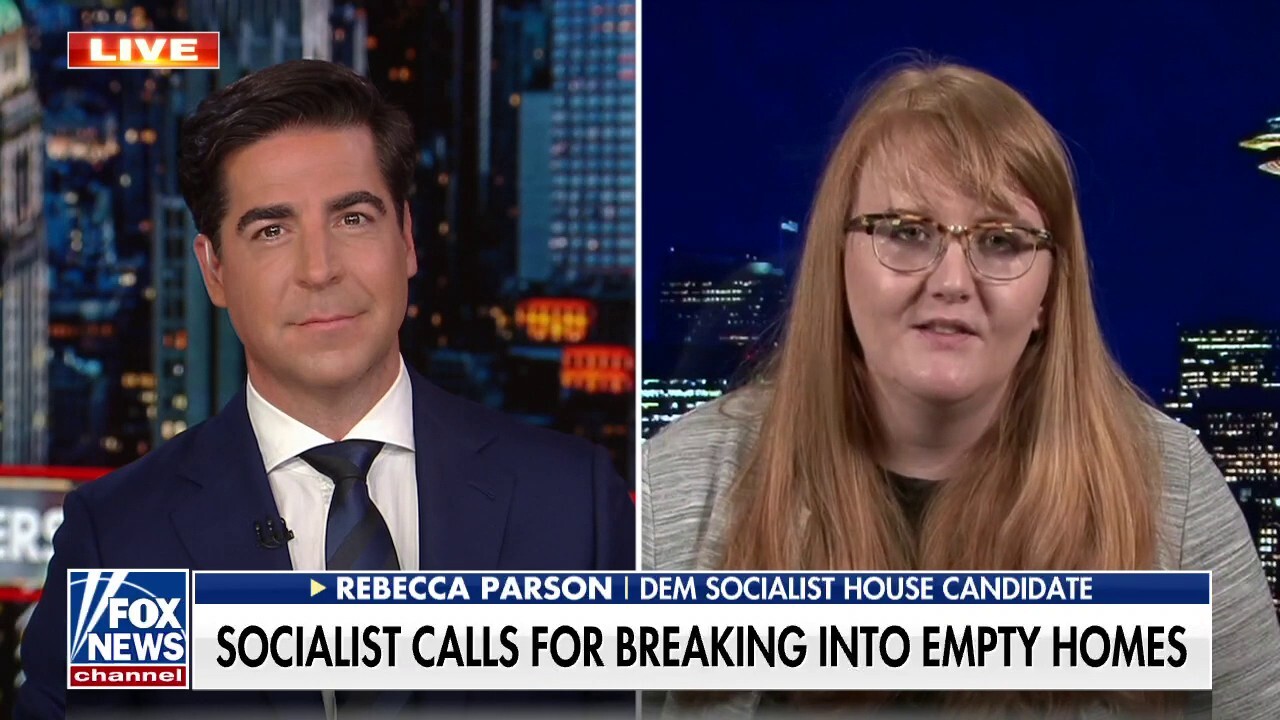 Rebecca Parson, a Democratic socialist running for Congress in Washington State, defended her campaign video where she encouraged homeless people to break into vacant homes across the country to help her advance a potential housing bill if elected.

In an interview with Fox News host Jesse Watters on Thursday, Parson, a member of the Democratic Socialists of America, who is running to represent Washington’s 6th Congressional District, defended her controversial campaign ad, but clarified that she was referring to empty houses owned by banks and “corporations like Zillow and BlackRock.”

“I’m just pointing out the fact that there are 600,000 homeless people in this country, 40,000 homeless veterans and one in five homeless people are kids. Meanwhile, we have 28 empty homes for every homeless person,” she said on “Jesse Watters Primetime.” “So I’m calling on all of us to think about the empty homes that are owned by corporations like BlackRock, like Zillow, like the banks, that are owned by those companies, those large corporations and not being used for what they’re intended for, which is actually housing people.”

Rebecca Parson, who’s running for Congress in Washington’s 6th district, tweeted on April 21 that the minimum wage should be increased to $30.
(Twitter/Rebecca Parson)

Occupying buildings is nothing new for Parson. In 2020, she was a spokesperson for the group Tacoma Housing Now, which organized a group of homeless people in 16 rooms at a motel in Fife, Wash. The group paid for one night for the rooms, then demanded that the city and state government pay as the people refused to leave, according to local KING5. Parson says she has been homeless herself.

When told about a Fox News report that identified the potential legal issues involved with occupying property owned by someone else, Parson appeared to pivot her position, insisting that she is “not calling on people to break the law,”

Instead, she said, she is “calling on us to think about buildings that have been empty for a while that are owned by corporations. You are not having a lot of buyers coming looking at them. They are just sitting empty and there are a lot of houses like that, both in places like here in Washington State and across the country. So I think that in the richest country on earth we should not have anybody who is homeless living on the street,” she said, “especially not 40,000 veterans, especially not 120,000 kids.”

Watters later asked Parson about her calls to abolish ICE.

“We managed fine before ICE,” she said. “What I’m really concerned about is the fact that all across the country, including in my district, there are 28 homes empty homes for every homeless person. Why do we have veterans sleeping on the street who served their country and now they can’t even find a place to live? So I’m asking people to think about this situation.”

“They act like the problem is way too complicated to solve. Meanwhile, it gets worse and worse and worse…and we need to take a different way of looking at this issue,” she said.

Parson previously ran for Congress in 2020 and lost in the primary.