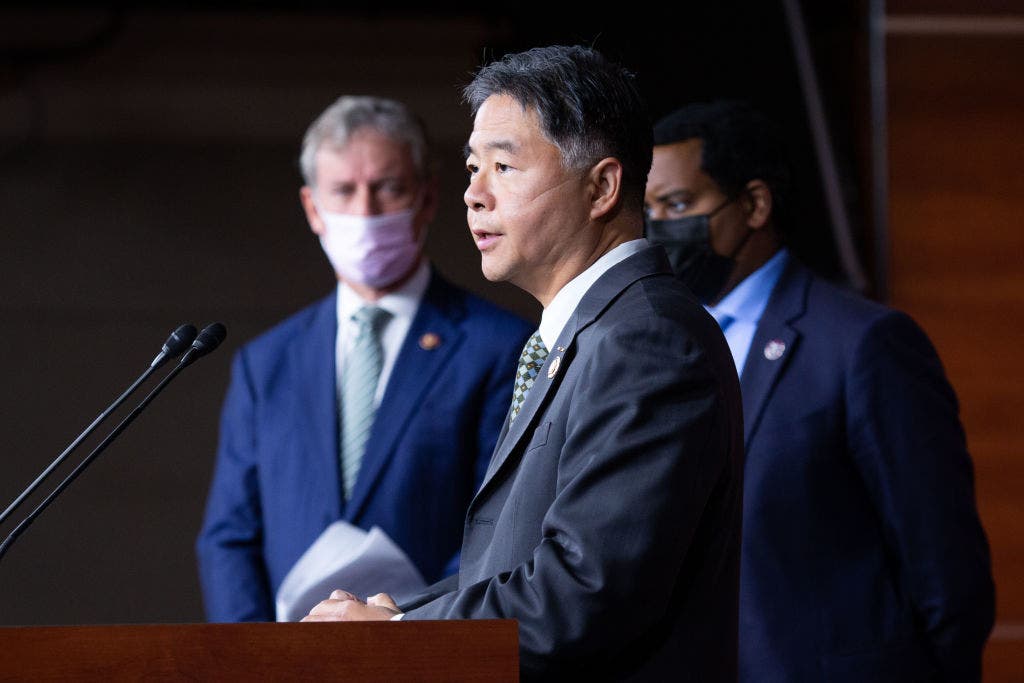 Democrats asked reporters to do a better job selling President Biden’s Build Back Better agenda, lamenting that press coverage has focused too heavily on the negotiation process instead of the “substance” of the plan.

During a news conference Tuesday, members of the House Democratic Policy and Communications Committee were asked whether the party needed to change its messaging strategy so that the American public could understand what’s actually in the two bills they hope to pass, the Build Back Better Act and the Bipartisan Infrastructure Investment and Jobs Act.

Democratic Rep. Hakeem Jeffries, with colleagues, speaks at a press conference following a meeting of the Democratic Caucus at the U.S. Capitol in Washington, D.C., on Nov. 2, 2021. (Photo by MANDEL NGAN/AFP via Getty Images)

Rep. Ted Lieu, D-Calif., who co-chairs the committee, responded that it would be “helpful” if reporters could write more about what’s in the bills.

“We’re also in a really different information ecosystem than we were in even a decade ago,” he said. “You know, QAnon folks believe that JFK is going to magically reappear pretty soon. So that is sort of what we’re dealing with.

House Rep. Ted Lieu, D-Calif., speaks during a press conference after a House Democratic Caucus meeting at the U.S. Capitol on Nov. 2, 2021 in Washington, D.C. (Photo by Allison Shelley/Getty Images)

“And we do, in part, rely on all of you to convey the truth and actual facts,” he added. “And if you all want to write about this amazing tax cut for families and children that’s really transformative, that would be really helpful.”

Rep. Joe Neguse, D-Colo., lamented that the media’s focus on the process “obfuscates away from the substance” of the bills.

“Most of the coverage right now and the better part of the last few months has been on process, which of course, makes sense because we are engaged in a complex legislative process to get these bills across the finish line,” he said. “But that, in some respects obfuscates away from the substance of these incredibly important, consequential pieces of legislation that will have lasting impact on the American people and American families.”

Rep. Hakeem Jeffries, D-N.Y., said the committee plans to message with “simplicity and repetition about all the good, big, transformative, bold things that we have done for the American people.”