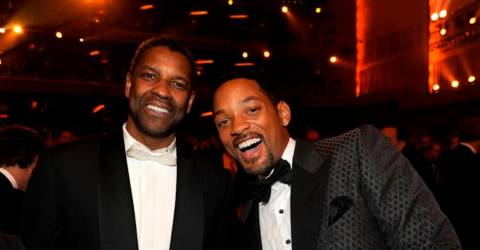 DURING author and bishop T.D. Jakes’ leadership summit on Saturday, Denzel Washington broke his silence about Will Smith’s behaviour to Variety.

“There’s a saying, ‘When the devil ignores you, then you know you’re doing something wrong.’ The devil goes, ‘Oh no, leave him alone, he’s my favourite.’ Conversely, when the devil comes at you, maybe it’s because he’s trying to do something right,“ Washington said.

“And for whatever reason, the devil got ahold of him that night.” Washington added that following the altercation, he and Tyler Perry both prayed with Smith.

“Who are we to condemn? I don’t know all the ins and outs of the situation, but I know the only solution was prayer, the way I see it.”

The Los Angeles Police Department also said in a statement that Chris Rock had declined to file a police report.

Actor Jim Carrey also weighed in and explained that most celebrities are pressured to take on too many roles. “It’s beyond our bandwidth. And we’re starting to see the symptoms of what it’s like and cracking under the pressure.

“It was more than just an insult to someone’s wife. Jada’s a tough girl. She can defend herself. [Will] was just thinking more about how he was looking in that moment than what was the right thing to do.”

On Friday, just five days after his first Oscar win, Smith apologised in a statement and resigned from the Academy of Motion Picture Arts & Sciences, stating that he will accept any further consequences the Board deems appropriate.

Smith explained that he was heartbroken that he deprived other nominees and winners of their opportunity to be celebrated for their work and that he acknowledged that his actions were shocking, painful, and inexcusable.

“Change takes time and I am committed to doing the work to ensure that I never again allow violence to overtake reason,“ Smith concluded in his statement.

The statement came after the six-minute virtual call with the Academy’s president David Rubin and CEO Dawn Hudson.

The Academy has accepted Smith’s resignation and the board will meet on April 18 to determine additional consequences.