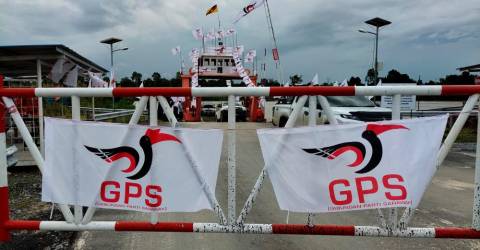 KUCHING: Bawang Assan, Engkilili and Opar are names of places in Sarawak hardly mentioned on ordinary days, but these are not normal times.

And as the 12th state election moves closer to polling day on Dec 18, political developments in these areas are being closely watched.

There is a good reason for this. All three incumbents in those constituencies are from Parti Sarawak Bersatu (PSB), who were once “friends” of the ruling Gabungan Parti Sarawak (GPS), the coalition of four state-based parties, before deciding to end this political relationship in 2019.

PSB president Datuk Seri Wong Soon Koh is defending his Bawang Assan seat, and so are Dr Johnical Rayong Ngipa in Engkilili and Datuk Ranum Mina in Opar, and the trio is now seen as the hardest stumbling blocks for GPS to win in those constituencies.

These are heavyweights in their own right. For Wong, 79, this will be his seventh contest in Bawang Assan, a seat he has never lost since making his debut in 1991. Rayong, 59, is going for his fourth term in Engkilili and Ranum, 70, his fifth in Opar.

“They are warlords in their kawasan (constituency). Very influential and they have been doing their part (serving as assemblymen). It will not be easy to challenge them,” said National Council of Professors senior fellow Dr Jeniri Amir .

Jeniri said being incumbents for nothing less than 15 years would certainly give them the upper edge, and GPS being the ruling party would have taken into account the personality factor in its bid to challenge them.

Yet, he was also not discounting the possibility that these incumbents could lose sizeable support from constituents who were now ready to look at the bigger picture, as in how much authority would they wield should the opposition fail to wrest the state government from GPS, whom he said remain favourites to take two-thirds of the 82 seats up for grabs.

“Some may no longer support them (PSB incumbents) because they are no longer in power but some will still stick with them out of loyalty.

Jeniri said face-to-face campaigning, coupled with a lot of resources, well-oiled election machinery and the right approach of introducing new candidates in the areas concerned would have to be combined well in order to unseat these incumbents.

“Still, it will not be a walk in the park (for GPS to capture the three seats). It will be all about hard work covering a lot of places,” he said.

Universiti Putra Malaysia political scientist, Prof Datuk Dr Jayum Jawan, meanwhile, ranked Wong as having the greatest chance to retain his seat among the three incumbents as he regarded the six-term assemblyman as a political heavyweight with a well-known personality.

“Of all the PSB candidates, he (Wong) has the brightest prospect of being re-elected. The GPS candidate in Bawang Assan (Robert Lau Hui Yew of SUPP) needs to work harder to dislodge an incumbent who has developed a personal following since being the representative there for quite a long time,” he said.

Rayong and Ranum, by virtue of being seasoned representatives in their constituencies, are also favourites to win again, Jayum opined, adding that strict standard operating procedures (SOP) and limited campaigning activities were in fact an advantage to them.

“Their opponents have to work hard to reach out to voters and to get their message across. However, GPS candidates have the backing of an established and well-oiled election machinery and the status as being part of the ruling coalition, and this could prove to be an attractive incentive to the electorate,” he said.

Universiti Malaya socio-political analyst, Associate Prof Dr Awang Azman Awang Pawi, on the other hand, said apart from maximising their strong election machinery, GPS needs to ensure their candidates are able to rival the PSB incumbents’ personalities and work out a well-calculated campaign.

He said these incumbents will now be heavily banking on the personality factor, service track record and influence in their respective areas since losing their ‘status of authority’ after having cut ties with the ruling government.

“When personality politics has an influence on their political positions, it can be countered by a much stronger machinery, more suitable candidates and a comprehensive election campaign,” he said.

Wong, who happens to be the oldest candidate in this state polls, will be defending his Bawang Assan seat in a five-way tussle against Lau, Amy Lau Bik Yieng from DAP, Michelle Ling Shyan Mih of Parti Bumi Kenyalang (PBK) and independent candidate Ricky Enteri.

In Engkilil, Rayong will have to fend off challenges from Desmond Sateng Sanjan of GPS, Stel Datu (PBK) and independent candidate Gemong Batu.