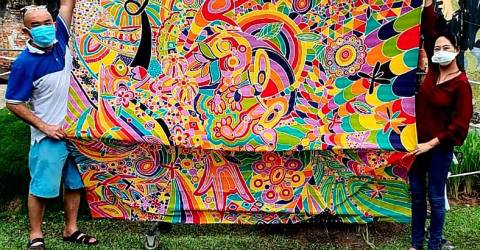 BATIK is both an art and a craft that is an undeniable part of Malaysian culture. But despite its wide popularity in the country, not all batik enthusiasts are aware of the time-consuming technique required to produce this priceless heritage.

We recently discovered an outstanding batik artist who shares his voice through his artistic works.

In a email interview with theSun, Lim Anuar – who hails from Kuala Lumpur and is a self-employed batik artist and art producer – expained his journey through the art, hardships and his inspirations.

Lim Anuar has been Deaf since birth. Lim’s mother was concerned about his difficulties and went on a search for a special school for him. When his mother discovered the Federation School for the Deaf, she immediately sent him there for training when he was three years old.

Lim returned to Kuala Lumpur after finishing his education in order to find work. Before pursuing a career in art, he worked 14 different jobs.

Lim first met Datin Khairiah Khairuddin, the owner of Batik Sayang in Petaling Jaya, Selangor, in the 1990s, who offered him a job in her batik factory. Lim accepted the offer and began working part-time.

He began designing batik souvenirs under her supervision, and his ideas surprised her so much that she later offered him a full-time position at Batik Sayang. He then began to explore huge potentials in the market for batik.

He was extremely pleased, because he was the only Deaf contestant, and earning first place demonstrated that he was nothing less than exceptional.

When we questioned when he became interested in the arts, particularly batik, Lim said: “My interest in the arts started when I was about ten years old.

“My first exposure to batik was during a school lesson in Penang, where there was an art subject that included batik painting.

“I was trained in a variety of mediums, including batik painting and linocut printing.

“There was a prominent Penang batik artist named Datuk Tay Mo Leong who inspired me to continue my batik journey. I was also inspired by my favourite batik paintings by popular local batik artists, the late Ismail Mat Hussin from Kelantan and the late Tan Thean Song from Penang, even though I never met them.”

His inspiration comes from his experiences growing up in Penang, which is home to people from all walks of life. He portrays scenes from his childhood, as well as local flora and fauna.

“I was motivated more by foreign tourists’ requests, so I chose to realise my idea through a series of batik paintings focused on the subject of traditions, culture, and heritage, which have been shown and promoted all over the world so far,” he explained.

His first piece of art was titled One World, One Peace, and it served as inspiration for his painting series called Malaysian Life.

“Batik [technique] is still being created through my own way with modern knowledge of the batik materials, as well as design and themes of multicoloured shades and effects,” he continued.

“My present work is concerned with community themes such as gotong-royong.”

Gotong-Royong II is his favourite work of art. In to the painting, the villagers’ teach their children to sweep up leaves from the ground.

The spirit of goyong-royong draws all Malaysians together to join hands and contribute to the community in which they reside. It is a neighbourly method to keep our environment clean, safe, and healthy, particularly when climate change affects our daily lives.

When we asked him about the challenges he encountered as a Deaf artist, he said communicating was the most difficult.

“My Deafness put me in a very disadvantage situation in life. I am unable to express myself, share my thoughts, exchange ideas, or receive information quickly. What hearing individuals learn now, I [will find out] a few months later.”

“There are some situations when I struggle to cope, such as networking meetings, large group discussions, interviews, and phone conversations.

“Note-takers and interpreters are not always easily available or affordable. This communication barrier has impacted my ability to properly advertise myself in-person. It has also caused me to become shy and withdrawn.

“Deaf individuals can’t speak, and non-deaf people can’t sign well, so they can’t communicate with one other.”

He added: “Fortunately, new technology is developing at the moment, so we can resolve the communication barrier independently through text, email, and live transcription.”

Despite these technological advances, as a self-employed artist and art producer, he still faces a lot of uncertainty in terms of paid jobs and revenue.

It is difficult for him to pursue this line full-time because the Malaysian market is so limited, and he lacks experience in art marketing and promotion. Obtaining money, mentorship, and training are also significant challenges.

Another difficulty he faces is managing his art business on his own. He learned through practice and by making mistakes. He also has to balance the commercial side of things while still creating artwork.

In the creative industry, the most difficult element of the creation process is coming up with new ideas and experimenting with new methods of making new work that is distinct from his past creations.

In 2013, two of his paintings were chosen to be exhibited in the Arts Kuala Lumpur exhibition in Miami in conjunction with the Art Basel Miami, Florida, United States, and five of his paintings were also chosen for the Arts Kuala Lumpur exhibition 2014 & 2015 in Melbourne, Australia, which was organised and supported by National Visual Art Gallery and MATRADE.

He had the opportunity to compete in many local and international events, and he won numerous awards. He represented Malaysia’s disabled community in a number of exhibitions and contests, including those in Australia, India, and Japan. He received a gold medal (first prize) in silk painting while representing Malaysia at the 8th International Abilympic (Olympic of Ability) Competition in Korea in 2011.

Currently, one of his paintings is on display at the National Visual Art Gallery in Kuala Lumpur for the Open Show event, and he is working on a large floor mural project measuring 7m x 120m.

In the near future, he hopes to become a lecturer of art and design for the Deaf in an academic institution. He also wants to be an art consultant and the manager of a Deaf artists’ art centre.

Lim aspires to be a professional artist on an international scale. He hopes that by achieving his goal, the public will be more willing to recognise persons with disabilities as equals and capable.

His current and planned projects include creating fine art batik paintings for wall hangings and mural art, as well as engaging in group art exhibition events.

“I feel that our ‘self-improvement’ will inspire others in the art industry. So I think anyone who are interested in working with us on future project collaboration or strategy planning are welcome to join us.”