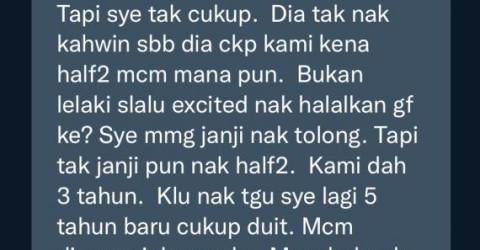 RECENTLY, a dissapointed yet confused woman took to social media to voice out her frustrations on being made to fork out half for her wedding dowry by her boyfriend.

The woman took to Twitter to ask for advice on dealing with money matters regarding paying her part of the dowry for her wedding recently.

She also asked whether she should leave the relationship.

“I would like some opinion from the netizens. When you’re about to get married, there will usually be hantaran given to the girl’s family, am I right? But of course, if we want to help, that’s also possible. I know that my boyfriend has enough money to cover the hantaran, he has more than enough to cover for it, but I don’t have enough,” she said.

She explained that she is still saving up however, her current savings indicate that she will require another five years to reach the desired amount and explained her concerns to her boyfriend, who insisted on splitting the costs in half.

“I’m not saying that I don’t want to pay, I just didn’t expect for me to pay half of it. I thought guys would usually be willing to cover more, but it seems like I was wrong. We’ve been together for 3 years and I’m not sure if I want to wait another 5 years to get married. When he mentioned that he doesn’t want to get married until I have my half of the money, I just feel played“, she added.

The woman then concluded her post saying that she is from a middle class family but struggling a bit to save up and make ends meet.

“I feel like he is so calculative and now I’m just afraid that he will become worse after we’re married. What should I do? Should I break up?,” she asked.

“If I were you. I would’ve started saving up along with him. Maybe you could discuss and see if he could pay for the hantaran while you pay for things like decorations for the house the both of you will stay in. You can’t keep finding fault with the guy and not see your own flaws. You cannot expect to live off of other people’s hard work,“ a netizen commented.

“3 years and you didn’t even bother to start saving up. Now when he wants it to be fair and square, you say you felt played. Who is playing who now?,“ another netizen retorted.

“You should try discussing with him first. When it comes to money, it will definitely be a hard chapter to swallow. Maybe you could let him know that you’re willing to cover other things in the wedding like, photographers, make up and other things that aren’t so taxing. Just be transparent with each other. Don’t give up yet, just try to discuss with him properly,“ another netizen added.