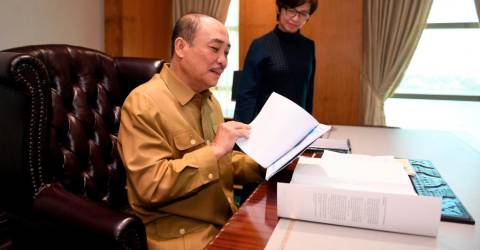 PENAMPANG: Sabah Chief Minister Datuk Seri Hajiji Noor (pix) has called for disaster preparedness throughout the state in anticipation of the northeast monsoon season this month.

Hajiji said that all district disaster management committees statewide had been instructed to be on alert and to place logistic preparations on stand by including temporary evacuation shelters (PPS) in all districts.

“The state government has been also working closely with its federal counterparts through the National Disaster Management Agency (Nadma) particularly in channelling monetary assistance and allocations in the event of a disaster during the monsoon season.

“The government will always prioritise the people’s welfare regardless of their background, in line with the ‘Keluarga Malaysia’ spirit, which underlined the three main thrusts of inclusivity, common ground and contentment,” he said at the Sabah Cultural Centre, here, today.

Earlier, he presented RM1,000 cash assistance to 200 household heads who were affected by floods in September. The remaining 737 household heads will receive theirs within the next two weeks.

He also said that the flood mitigation programme for the Penampang district is ongoing.

“The government will ensure that the project will be completed. Two of the three flood mitigation packages have already been completed,” he added.