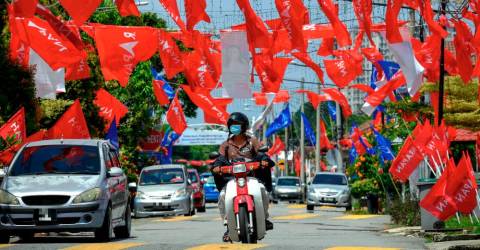 PETALING JAYA: If the recent state polls in Malacca, Sarawak and Johor are taken as a yardstick, then we may see a disunited opposition in the 15th general election (GE15), say political analysts.

Prof Azmi Hassan, a senior fellow at the Nusantara Academy for Strategic Research, said opposition parties are well aware they need to work together in the coming general election if they want to defeat Barisan Nasional (BN) but the baggage and distrust they carry make any cooperation almost impossible.

He said in the last two elections in Johor and Malacca, the Opposition could have defeated BN if they had not gone against one another in most seats.

“One fact persists: The opposition parties can’t see eye to eye. It is the baggage they have because of the Sheraton Move that makes it difficult for them to work together.

“Perikatan Nasional (PN) had wanted to work with Pejuang but it did not materialise because of the role Bersatu and Tan Sri Muhyiddin Yassin played in the Sheraton Move.

“Even Pakatan Harapan (PH) is not willing to work with PN for the same reason.”

Azmi said the betrayal by Bersatu has left a bad taste in the mouths of opposition parties.

He said in the next general election there will likely be three main blocks, namely BN, PN and PH.

On the question of Warisan, he said it wants to be a dominant party so that it can have a say as to what happens in Sabah.

He added that it will be willing to work with any party that can win seats.

“It decided to expand because it would not be able to win enough parliamentary seats in Sabah to become the main player in state politics,” he said.

Azmi said even if somehow the opposition parties manage to reach an agreement, the main question is who will be their prime minister-designate.

“There is no clear-cut leader who can lead the Opposition at this moment,” he told theSun.

Universiti Malaya political analyst Dr Awang Azman Awang Pawi said based on what has transpired among opposition parties, it would be a hard sell to get them to work as one entity.

He also took the view that opposition parties have very little choice; they need to sort out their differences and start afresh.

“Warisan and DAP may not work together because some elected representatives from DAP have joined Warisan.

“It is also hard for Bersatu because the others may not want to work with Muhyiddin because he betrayed the people’s mandate with the Sheraton Move,” he told theSun.

“Another reason is each of the parties has its own agenda, thus making it hard for them to find common ground.”

He said it is more likely that the next election will be a free-for-all as they want to win to form the federal government.