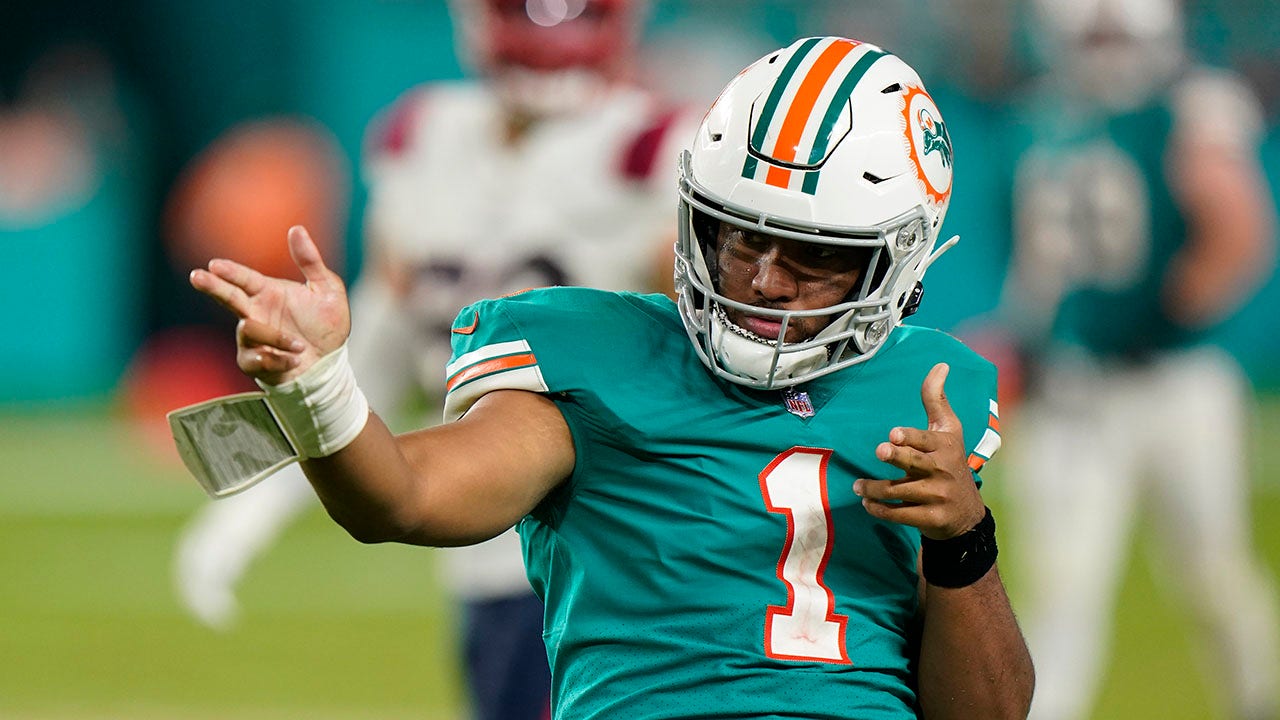 Jaylen Waddle had a touchdown grab and set the NFL record for receptions in a rookie year, Duke Johnson rushed for 117 yards and the Miami Dolphins finished their season by defeating the playoff-bound New England Patriots 33-24 on Sunday.

Xavien Howard returned an interception for a touchdown and Johnson had a touchdown run for Miami (9-8), which finished with a winning record for the second consecutive season and once again didn’t have a playoff berth to show for it.

Brandon Bolden two touchdowns — one rushing, one receiving — for the Patriots (10-7), who are headed to the playoffs as a wild card. But they were swept by the Dolphins for the first time since 2000 and the outcome handed the AFC East title to the Buffalo Bills, whose game against the New York Jets had not gone final when the Patriots-Dolphins game ended.

New England needed a win over Miami to keep AFC East hopes alive. The Patriots have played in wild-card games before under coach Bill Belichick — but have never been to the playoffs in the Belichick era as a wild card. All 17 of the previous playoff appearances in his years there have come after a division title.

That streak didn’t end easily, though.

New England needed only eight minutes to cut a 27-10 fourth-quarter deficit to 27-24. Mac Jones connected with Bolden for an 18-yard score on a screen to get New England within 10, and the Patriots got a stop to get the ball back.

Jones started the next possession by finding Jakobi Meyers for a 39-yard gain with 4:40 left to put the Patriots deep in Miami territory, Damien Harris rumbled in from a yard out a couple of minutes later and just like that the Patriots were within three.

Miami took over with 2:53 remaining, on its 25, with no timeouts and Tua Tagovailoa having thrown for the grand total of 2 yards in the second half.

Miami Dolphins wide receiver Jaylen Waddle (17) runs with the ball during the second half of an NFL football game against the New England Patriots, Sunday, Jan. 9, 2022, in Miami Gardens, Fla.
(AP Photo/Lynne Sladky)

He wound up sealing matters with his feet, not his arm. Facing third-and-8 from his 42 with just inside of two minutes to go and New England poised to get the ball back, Tagovailoa scrambled for 11 yards.

And soon, game over.

Johnson rushed for more yards than Tagovailoa passed for (109) and it didn’t matter. Miami found a way.

Jones completed 20 of 30 passes for 261 yards for New England. The Patriots got the ball back with 3 seconds left, needing 98 yards for a score, and Miami’s Sam Eguaoven was credited with recovering a fumble that became a game-ending touchdown.

It was 14-0 Miami in a flash. Waddle entered Sunday three catches from breaking Anquan Boldin’s NFL rookie record of 101 grabs set in 2003 — and the Dolphins got him that in their first four plays. He capped the drive with his sixth touchdown of the year, catching a 7-yard pass from Tagovailoa to opening the scoring.

Howard jumped in front of a pass by Jones and returned it 37 yards on the third play of the ensuing New England possession, putting the Dolphins up two scores and they never would trail. It was 17-7 at halftime, Johnson rumbled in early in the fourth for a 27-10 lead and it looked as if Miami had the job done.

Looks were deceiving, but the Dolphins held on.

New England lost OL Isaiah Wynn to an ankle injury in the second quarter. He walked up the tunnel leading to the locker room without much difficulty. RB Rhamondre Stevenson (head) and DB Sean Davis (shoulder) also had first-half injury issues for the Patriots and DL Christian Barmore was hurt on the Tagovailoa scramble with 1:48 remaining. For the Dolphins, S Eric Rowe limped off in the third quarter with a back injury and didn’t return.

Miami became only the second team to win both of its AFC East meetings against New England in the past 21 years. Buffalo did it in 2020; before that, Miami and the New York Jets both did it in 2000.