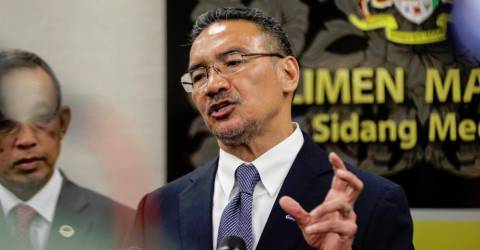 KOTA KINABALU: Incumbent Sembrong Member of Parliament Datuk Seri Hishammuddin Tun Hussein has reminded the 15th General Election (GE15) candidates contesting the seat to avoid playing up racial or religious sentiments in their campaign trail to maintain the harmony of the community in the area.

The Senior Minister of Defence said candidates contesting the Sembrong seat needed to be sensitive to Sembrong’s situation, which consists of a multi-racial and multi-religious community that has been living in peace and harmony for a long time.

He said the area was made up of a ‘unique’ mixture of Malays, Indians and Chinese, citing that the state assemblyman for Kahang is R.Vidyananthan, who is an Indian whereas the assemblyman for Paloh is Lee Ting Han.

“I am open for anyone to contest, this Sembrong area is unique, so candidates have to be good at handling themselves and ultimately the people will decide,“ he told reporters after visiting the Sepanggar Royal Malaysian Navy base here today.

He said this when asked about PKR’s announcement to field Johor PKR organising secretary and Parit Sulong division chief to contest the Sembrong parliamentary seat in GE15.

Hishammuddin will defend the Sembrong seat that he won in the GE11 in 2004 and retained in 2018 when he defeated PKR’s candidate Onn Abu Bakar with a majority of 6,662 votes. – Bernama