It’s almost too clever… Downton Abbey embraces ‘meta’ in its latest feature film A New Era, but does it still have the same old charm?

By Matthew Bond for Event Magazine

Of all the film franchises likely to embrace the growing cinematic fad for going a bit ‘meta’ – by which I mean a playful, self-referential knowingness that what we are watching is indeed a film – just about the last on anyone’s list would surely be the well-starched Downton Abbey. But not any more.

For as the second feature film to be spun out from the former stalwart of the Sunday night TV schedules gets under way, one of the main storylines concerns a fictional film production company renting Downton Abbey to make a silent picture. 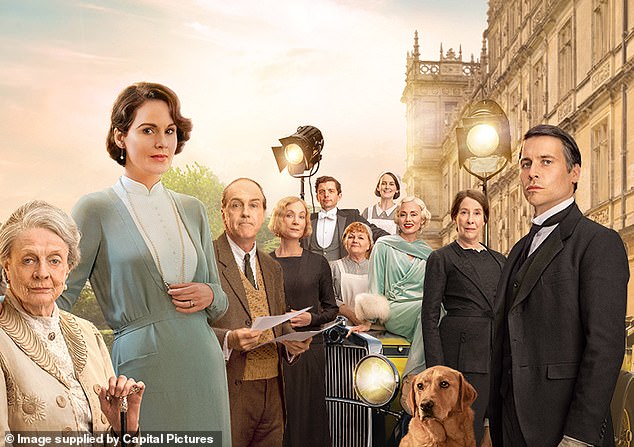 It’s almost too clever, which is one reason why Downton Abbey: A New Era gets off to such an awkward and clumsy-feeling start

Cue much outrage both above and below stairs – ‘I think it’s a horrible idea – all those actresses plastered in make-up,’ harrumphs Lord Grantham – and the truly mind-bending thought of a real-life 21st Century film unit shooting a fictional early 20th Century film unit in the equally fictional Downton Abbey, which we all know is actually the real-life Highclere Castle.

This almost too clever of conceits dreamed up by writer and creator Julian Fellowes is one reason why Downton Abbey: A New Era gets off to such an awkward and clumsy-feeling start.

With director Simon Curtis dialling up the comedy to a dangerous degree, another is the sheer difficulty of remembering who’s who.

The first – and rather good – film was released three years ago and the TV series itself hasn’t been seen for more than six years, and getting back up to speed is a challenge. 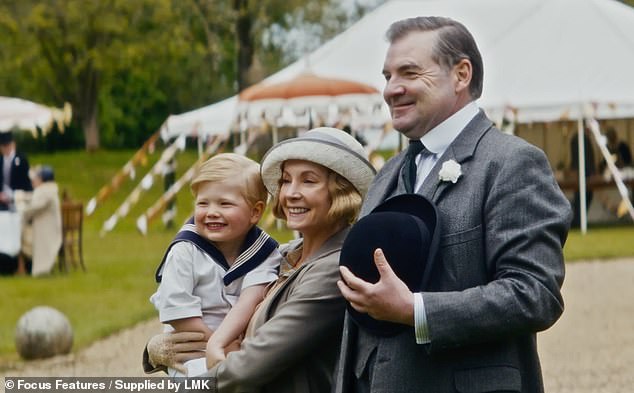 The first – and rather good – film was released three years ago, so getting back up to speed is a challenge. Above: Joanna Froggatt and Brendan Coyle

Who exactly is former chauffeur Tom (Allen Leech) newly married to? And who is the new but conveniently absent husband of the easily distracted Lady Mary (Michelle Dockery)?

And who is this Sybbie everyone keeps banging on about?

She certainly seems to be at the heart of the film’s other main storyline which sees the Dowager Countess (Maggie Smith, delivering the withering put-downs as beautifully as ever) being left a villa (more of a palace, actually) on the French Riviera.

But it’s about now – as half the cast head to the Mediterranean while the other half stay at home to help make what Carson the butler calls the moving picture – that A New Era slowly hits its stride and we begin to remember why we like Downton.

Yes, it is a bit silly but it’s also charming, well acted and beautifully done.

The film-within-a-film device brings in fresh talent in the shape of Hugh Dancy, who plays the silent film’s engaging director, and Dominic West and Laura Haddock as its two stars, struggling with the arrival of talkies.

All three contribute rather splendidly to a film that eventually manages to be huge fun and yet will still have many of us dabbing gently at our eyes. Yes, Downton has done it again.

We’re All Going To The World’s Fair is a low-budget, American chiller from writer-director Jane Schoenbrun that has picked up a bit of a festival following but which, as it is finally released into the cold light of cinema, feels too slow, weird and disjointed to enjoy much commercial success.

But is there really anything faithful about her eventually offputtingly convoluted story? Sadly, I didn’t care.