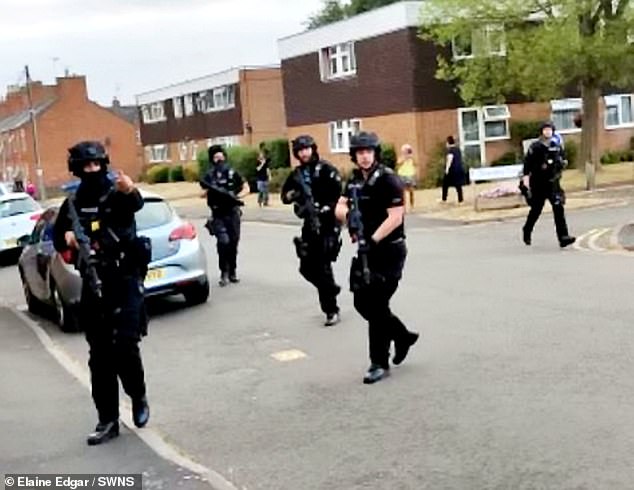 By Elizabeth Haigh For Mailonline

Dramatic footage shows the moment armed cops arrested a suspected gunman after he was caught be a group of members of the public.

Officers swooped on Bewdley Street in Evesham, Worcestshire at around 7pm on Wednesday (July 20).

Several residents had called 999 and reported seeing a man waving a gun in a nearby meadow.

She said: ‘There was a bit of panic because some people said they saw a man with a gun in the meadow.

Five armed police officers run towards the suspect, instructing him to sit on the ground ahead of arresting him 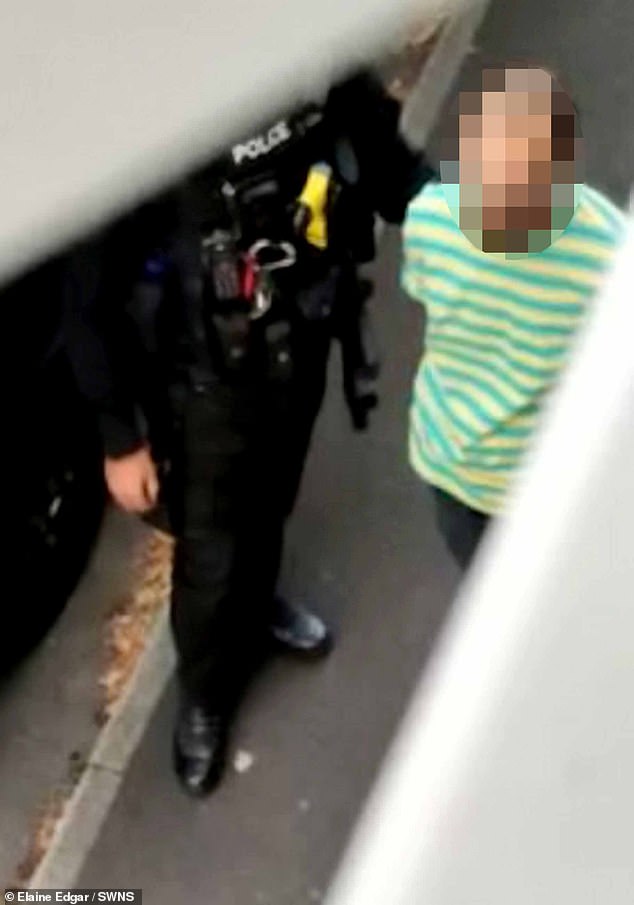 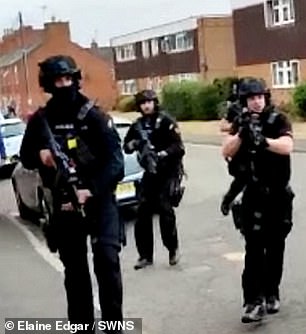 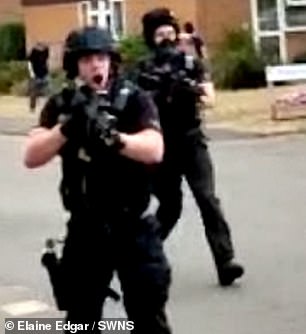 Police were called to Bewdley Street in Evesham, Worcestshire at around 7pm on Wednesday after residents reported seeing a man ‘waving a gun’ around

‘I’d heard the helicopter buzzing around for ages and going over my house again and again.

‘I heard some shouting from outside my front door so went to the window.

‘There were three men walking next to the suspect and they were shouting at police, “Up here! Up here!”

‘They were very brave because they didn’t know if the man was armed. The cops raced towards the man and forced him to sit on the ground.

‘He was handcuffed and taken away. It was very dramatic stuff.’

In the footage at least five armed police officers can be seen approaching the suspect, shouting instructions to him as they approach.

A small crowd of residents watch the dramatic incident unfold in front of them. 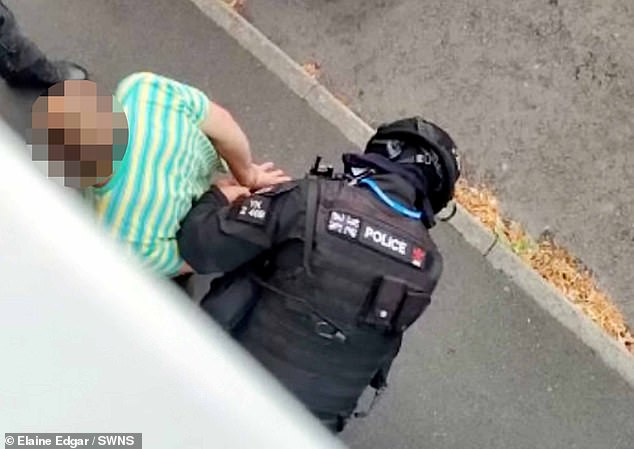 Video taken by local resident Elaine Edgar, 61, from outside her window shows the moment of the arrest 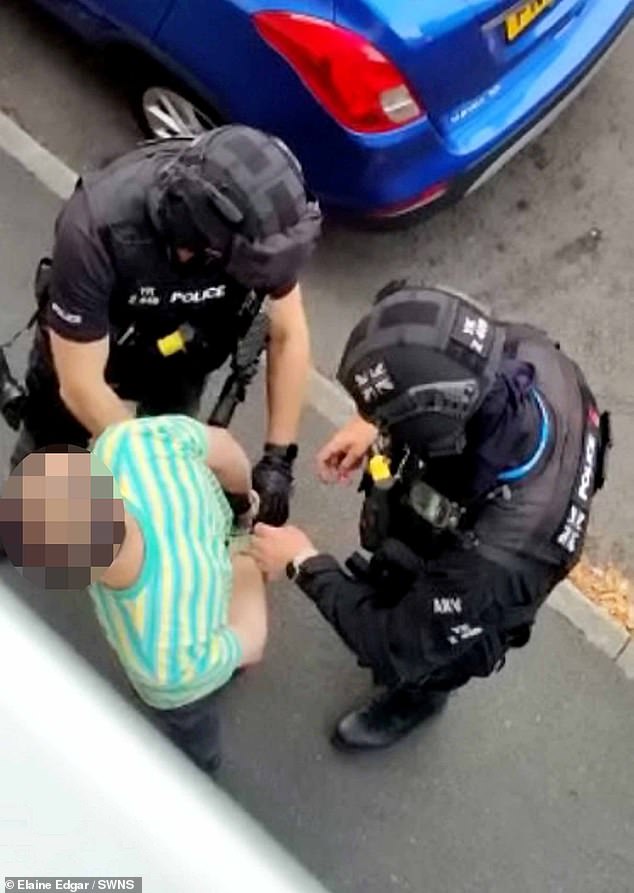 Two men from Evesham were arrested in connection with the incident, one aged 20 and one aged 36 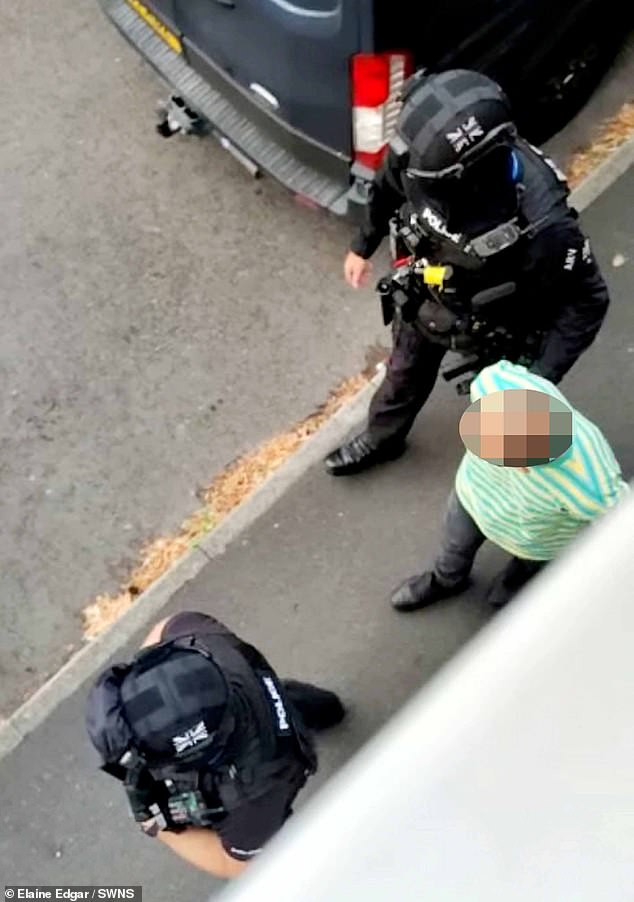 Elaine Edgar said those who had initially detained the man were ‘very brave’. An air weapon was recovered from the scene. 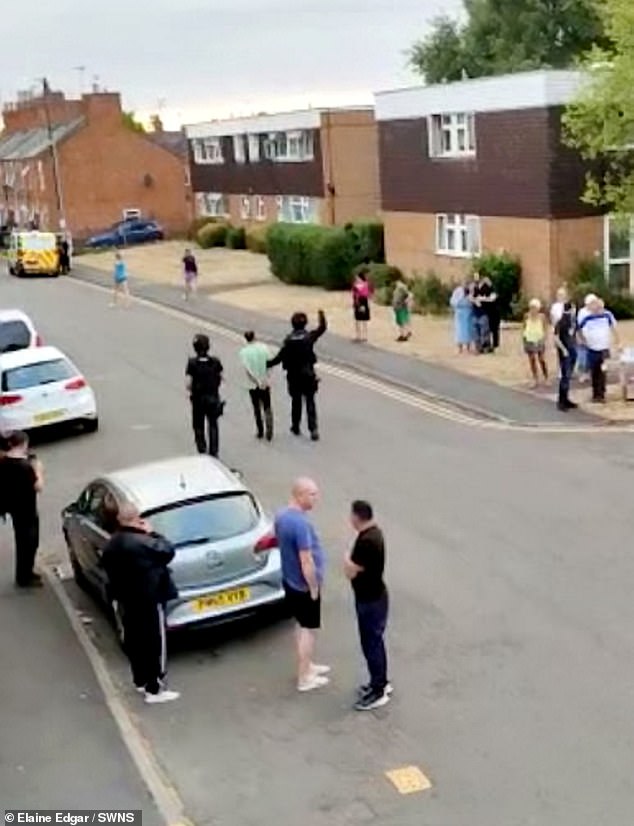 West Mercia Police said: ‘Two men have been arrested in Evesham after a report of a man carrying a firearm.

‘Around 7pm officers attended Crown Meadow and searched the area.

‘Two men, a 36-year-old and a 20-year-old, both from Evesham, were arrested on suspicion of carrying a firearm in a public place and remain in custody.

‘No injuries were reported and an air weapon was recovered.

‘Officers remained in the area but there is no wider risk to the public.’