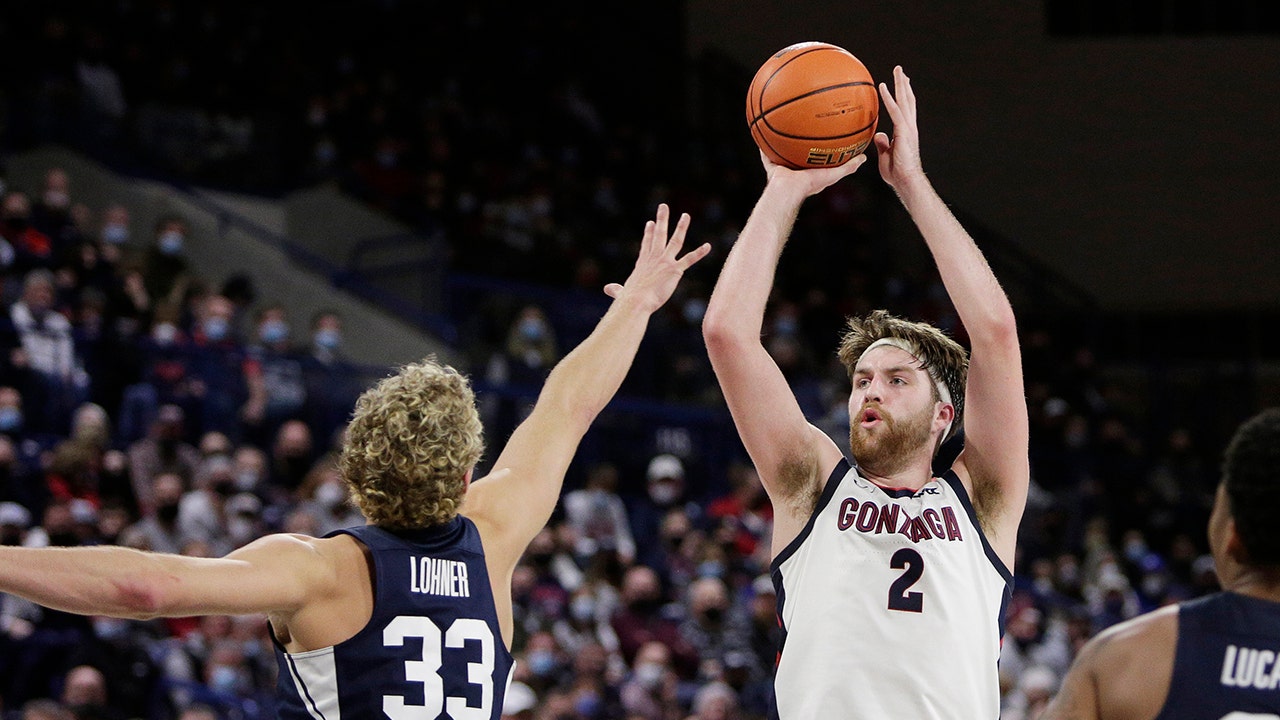 Coach Mark Few of No. 2 Gonzaga is always on his players to pick up the pace in games, and the Zags are doing their best to comply.

Andrew Nembhard had 22 points and 12 assists, and Julian Strawther added 20 points for Gonzaga (13-2, 2-0 West Coast), which shot 69% in the game and made 11 3-pointers. Chet Holmgren added 12 points, seven rebounds and five blocks.

“Coach is always on us to push the ball, make it a high-possession game,” Timme said. “It’s just what we’ve always done here.

“We put up 100-some points and we are not satisfied with that,” Timme added. “We can do better.”

Alex Barcello scored 19 points to lead BYU (14-4, 2-1), which was the last WCC team to beat Gonzaga in February of 2020. The Zags have won 23 conference games in a row since, also the longest streak in the nation.

Caleb Lohner added 17 points for the Cougars, who shot just 43% but made 13 3-pointers.

Gonzaga shot even better in the second, making 71.4% of their shots.

Timme, a player of the year candidate, was extremely efficient, Few said.

“Just to have a guy who can literally deliver on the block is an incredible asset to have,” Few said. “He’s been really good in the big games.”

An 11-2 run midway through the second — with nine points by Timme — gave Gonzaga a 20-point lead at 80-60. The Zags continued to pull away after that, while BYU slumped to 36% shooting in the second half.

“We did find some answers on offense but we couldn’t stop them on the defensive end,” BYU coach Mark Pope said. “They had so many guys that we had no answer for, especially Strawther.”

With No. 1 Baylor losing to Texas Tech earlier this week, Gonzaga has a chance to reclaim first place on the AP Top 25 on Monday.

The Topps Company announced a new partnership with Gonzaga center Chet Holmgren. Holmgren’s deal is the biggest Name, Image and Likeness (NIL) investment that Topps has made with a college athlete, and offerings will include physical and digital trading cards. Holmgren is a five-star recruit and considered the No. 1 player in the 2021 class.

BYU: The Cougars dealt Gonzaga three rare home losses from 2015-17, but the Bulldogs have dominated the series since, winning 10 of the past 11 games. … BYU was picked to finish second in the WCC and was ranked as high as No. 12 earlier this season.

Gonzaga: The Bulldogs topped 100 points for the second time in two WCC games. … They lead the nation in shooting at 52.3% and are second in scoring at 87.9 points per game. … Four Gonzaga starters average in double figures.

Gonzaga plays at Santa Clara on Saturday in what will be the Bulldogs first true road game of the season.