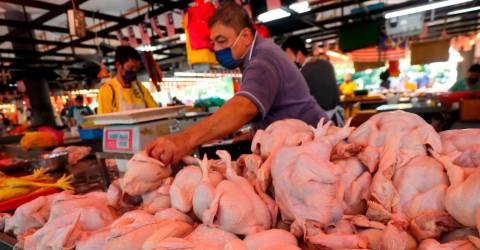 JUST a month ago, traders could not keep up with the demand for chicken due to a shortage of supplies. Now, as the supply is recovering, there are no customers.

According to a report by Sinar Harian, people are turning away after the increase in chicken price to RM9.40 per kg since July 1.

“Right now, I can only sell about 30 chickens during weekends as compared to about 100 chickens previously.

“Customers are being frugal due to rising prices of goods,” he said when met by Sinar Harian at Pasar Tok Guru in Pengkalan Chepa.

Meanwhile, another trader Mohamad Safuan Mohamad Zain, 34 said the number of customers had decreased even though the chicken supply recovered about three weeks ago.