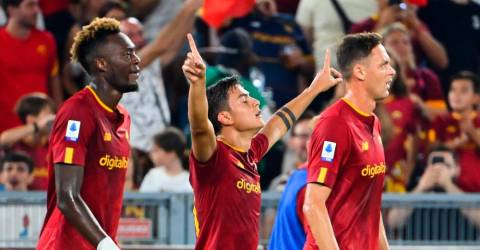 MILAN: Paulo Dybala shot Roma top of Serie A on Tuesday with a brace which sank Monza 3-0 while Inter Milan are one point behind Jose Mourinho’s side after their 3-1 home win over Cremonese.

Argentina forward Dybala brought up his goal century in the Italian top flight after netting twice in the first 32 minutes at the Stadio Olimpico to put unbeaten Roma on 10 points from their first four games.

Roma, who also scored just after the hour through Roger Ibanez’s header from a Lorenzo Pellegrini corner, are two points ahead of third-placed AC Milan after the champions were held to a drab goalless draw at Sassuolo.

“I really wanted to get a goal, and thankfully it happened here in front of our fans so I’m really happy,“ Dybala told DAZN, who added that it was “too early to talk” of a title challenge.

When asked which was his favourite of his 100 goals in Italy’s top flight, Dybala broke out into a wide grin and said: “The next one.”

Napoli and Lazio both have the chance to draw level with Roma in Wednesday’s respective fixtures against Lecce and Sampdoria, while Atalanta and Torino — also both on seven points — face off on Thursday.

Dybala’s goals came thanks to good work from Tammy Abraham, who sent the 28-year-old on his way to opening his Roma account in the 18th minute with a looping flick onto which his strike partner charged before rifling home.

The pair linked up again for Roma’s second, this time Abraham forcing a good save from Michele Di Gregorio before Dybala showed a more aggressive side to his game by beating the Monza defenders to the ball and bundling it home.

Inter are hot on Roma’s heels after bouncing back from their weekend defeat at Lazio despite having to do without star striker Romelu Lukaku.

But Joaquin Correa tapped the hosts ahead in the 12th minute and Nicolo Barella doubled their lead with a stunning volley seven minutes before half-time.

Substitute Lautaro Martinez drilled home his third of the season with 14 minutes remaining to make sure Cremonese, who scored late through David Okereke, stayed second-bottom and stuck on zero points.

Milan had Mike Maignan to thank for their unbeaten record staying intact, the France goalkeeper diving brilliantly to his right to keep out Domenico Berardi’s penalty midway through the first half.

“We lacked a bit of lucidity and cutting edge in certain situations and that is what we need to work on tomorrow,“ Milan defender Simon Kjaer told DAZN in the aftermath of his first appearance after nine months out with a serious knee injury.

The 33-year-old lasted 79 minutes and will be hoping to stay fit for the World Cup starting in November in Qatar where his national side Denmark will face France, Tunisia and Australia in Group D.

“It’s been a lot of hard work and a lot of sacrifice. I’m very happy to get back on the pitch and lend a hand to my team,“ Kjaer added.

Milan underwhelmed on their return to Reggio Emilia 100 days after winning the Scudetto there, while their sale to RedBird from fellow US investment fund Elliott Management is expected to formally go through by the end of the week.

Among the investors backing RedBird’s acquisition, according to a Financial Times report on Tuesday, are baseball’s New York Yankees and Main Street Advisors, a California-based investment firm whose partners include the likes of basketball star LeBron James and rapper Drake.

Sassuolo sit 10th on five points but will be concerned over the condition of talisman Berardi after the Italy winger was carried to the dressing rooms not long after half-time with what coach Alessio Dionisi said was a muscle problem. – AFP