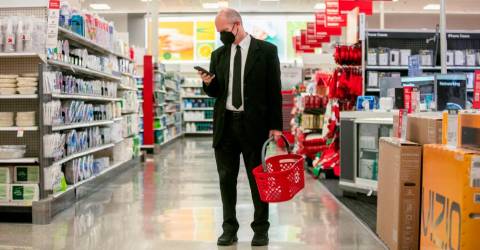 WASHINGTON: US economic activity eased in recent weeks, while uncertainty and “increased pessimism” clouded the country’s outlook amid high prices and rising interest rates, a report published by the Federal Reserve (Fed) said on Wednesday (Nov 30).

The Fed’s latest “beige book” survey of economic conditions comes as the US central bank pushes on with its all-out effort to cool surging inflation, although Fed chief Jerome Powell also signalled on Wednesday that it was likely time to slow aggressive rate increases soon.

“Economic activity was about flat or up slightly” since the last report in mid-October, said the latest release.

While five of the Fed’s 12 districts reported small gains in activity, the rest “experienced either no change or slight-to-modest declines”, added the report, which surveys firms and other contacts.

“Interest rates and inflation continued to weigh on activity, and many contacts expressed greater uncertainty or increased pessimism concerning the outlook,” the report said.

Consumer spending was mixed but eked out slight gains, with inflation nudging some buyers towards lower-priced goods, while tourism saw some improvement as well.

Higher interest rates took a toll on home sales, which fell “steeply” in some districts.

In the labour market, demand weakened overall according to the report, which noted there were “scattered layoffs” in the technology, finance and real estate sectors.

Separately, government data released earlier Wednesday showed the US economy grew more than initially reported in the third quarter this year, with upward revisions to retail spending and some forms of investment.

Gross domestic product (GDP) growth in the July to September period came in at 2.9%, annualized, better than the 2.6% figure reported in October by the Commerce Department.

It was the first expansion this year, after two quarters of negative growth that deepened fears of a recession in the world’s biggest economy.

The pick-up came days before midterm elections in the United States, in welcome news for President Joe Biden, but analysts have cautioned of a less rosy path ahead, saying that the leap seen in exports was unsustainable.

But this was partially offset by private inventory investment that was lower than expected, while imports decreased more than earlier estimated, the statement added.

But economist Oren Klachkin cautioned that the headline figure “masks cracks beneath the surface”.

A downward revision to imports meant net trade offered an “even heftier” boost to growth, he added in a note.

He added that the report also offered an early look at how companies fared in the last quarter, noting that profits “fared relatively well” despite a challenging environment.

“Despite higher borrowing costs and prices, household spending – the driver of the economy – appears to be holding,” economist Rubeela Farooqi of High Frequency Economics said in an analysis.

While economists expect this to be a positive trend in the near-term, they expect growth to follow a slower path as moves to cool the economy and bring down inflation bite. – AFP