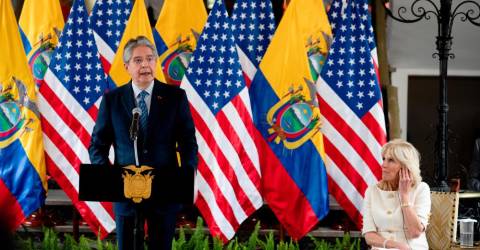 QUITO: Ecuadorean President Guillermo Lasso will attend the Summit of the Americas in Los Angeles next month, he said on Thursday during a visit to the South American country by U.S. first lady Jill Biden.

Lasso’s decision is a boost to the summit due to be hosted by the United States, because a number of Latin American leaders have cast doubt on their attendance.

“We are thrilled to attend the summit,“ Lasso said after he and his wife met with Jill Biden.

Lasso said he had a phone call with President Joe Biden about the summit.

“President Biden and I agree on issues affecting our people like drug trafficking, the lack of employment, and at the same time we know our friendly relations and desire to encourage well-being will be key to solving those problems.”

The first lady has toured an early childhood center and is set to meet with Venezuelan migrants during her stay in Ecuador.

Earlier this week, Guatemalan President Alejandro Giammattei said he would not attend the summit, a day after the United States criticized the Central American country for appointing its attorney general to serve another term. — Reuters