Amid the turmoil engulfing Prince Andrew, courtiers have made it plain that he will retain his honorary positions in the Armed Forces.

That’s a very significant consolation for Andrew, who served with bravery and distinction in the Falklands War as a young naval helicopter pilot.

But the most precious and intimate of these links now appears to be imperilled.

Prince Andrew is pictured with Her Majesty the Queen at Trooping The Colour earlier this year. But he failed to attend the Grenadier Guards’ most glittering dinner of the year

For I can reveal that the Duke of York, who succeeded his father as Colonel of the Grenadier Guards in 2017, failed to attend the regiment’s most glittering dinner of the year — despite being expected as guest of honour.

‘He said he would be coming,’ a military insider tells me, explaining that last week’s dinner was for the First Guards Club, whose membership is restricted to serving and retired Grenadier officers.

‘There was a chair for him, but he never arrived.’

The sight of an empty chair, intended for the Colonel of the Regiment, was unprecedented. It made a stark contrast with the record of Prince Philip, who attended this highlight of the Grenadiers’ calendar even when well into his nineties. 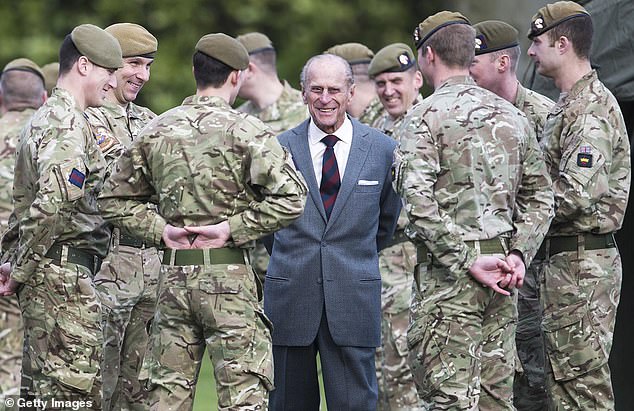 ‘He was wonderful: seemed to remember every single name and detail, wanted to know exactly what was going on in the regiment and in the Army and to hear what the serving officers were doing, particularly when they were on operations in Afghanistan.’ 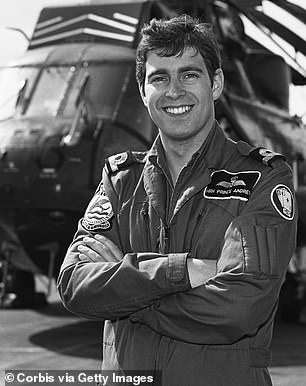 It would seem certain that Andrew intended to do his utmost to emulate Philip.

‘He was obviously thrilled to succeed his father,’ recalls the military insider, who explains that the appointment is in the gift of the Queen — the Grenadiers’ Colonel in Chief — who joins him on Horse Guards Parade for Trooping the Colour.

‘The Trooping’s a testing occasion for someone who’s not a natural or experienced horseman but Andrew has done well, made a real effort.’

The Grenadier Guards decline to comment on the Duke’s extraordinary last-minute absence.

But regimental voices have expressed disquiet about his continuing association with the Grenadiers — voices which he appears now to have heeded.

A Buckingham Palace spokesman tells me: ‘The Duke of York has stepped back from public duties.

‘We do not expect him to undertake any activity in support of his patronages or military associations during this period.’

Emerald Fennell, who plays a young Camilla Parker Bowles in TV’s The Crown, has spoken of her admiration for the Duchess of Cornwall

The smart set’s talking about…

Emerald Fennell, who plays a young Camilla Parker Bowles in TV’s The Crown, has spoken of her admiration for the Duchess of Cornwall.

And has the actress now taken her appreciation one step further? For I hear that she has named her baby son Clarence.

Coincidentally, Clarence House is the residence Camilla shares with Prince Charles. It was commissioned by the Duke of Clarence, later William IV.

Emerald’s father, the society jeweller Theo Fennell, confirms the name at the launch of his candlestick collection with the Royal Shakespeare Company.

‘I’m delighted to be a grandparent,’ he tells me.

‘We’re having the family at our house in the country this Christmas, so I’m looking forward to getting everyone together.’

Multi-talented Emerald, 34, who wrote the script for the second series of thriller Killing Eve, lives in Los Angeles with her boyfriend, the film producer Chris Vernon.

The Oxford graduate has said of Camilla: ‘From everything I’ve heard about her, she’s full of knowledge and a very grounded person.’ 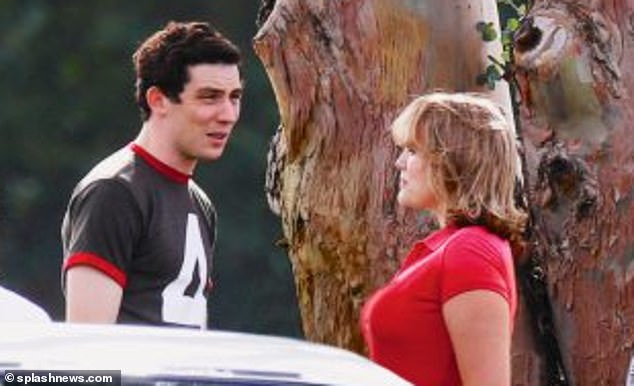 Young love: Josh O’Connor and Emerald in The Crown. I hear that Emerald has named her baby son Clarence. Coincidentally, Clarence House is the residence Camilla shares with Prince Charles

They swapped the Westminster village for the blue skies of Silicon Valley, but there’s trouble in paradise for power couple Steve Hilton and Rachel Whetstone.

I can disclose that PR supremo Whetstone is being sued by a former housekeeper at the mansion she shared in California with Hilton, who was David Cameron’s ‘brains’ in 10 Downing Street.

Katherine Aparicio, who worked at the couple’s home for two years, claims she toiled so hard that she sustained multiple injuries before being sacked.

In court documents, she says she cleaned the 6,000 sq ft home for $600 [£450] a week. Due to the repetitive and physical nature of the work, she developed pain in her shoulders, neck and back. She claims that when she notified her employer about her injuries she was promptly dismissed. 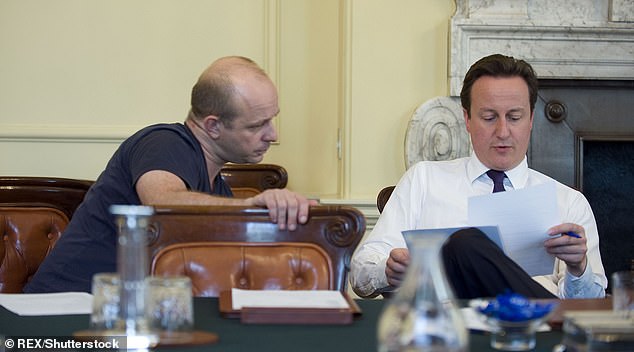 I can disclose that PR supremo Whetstone is being sued by a former housekeeper at the mansion she shared in California with Hilton, who was David Cameron’s ‘brains’ in 10 Downing Street

‘My shoulders started to hurt to the point where I was crying,’ she tells me. ‘I was sent home and then two days later I got an email saying I was fired.’

The couple claim Ms Aparacio ‘continues to make claims about her work that are simply untrue’.

A spokesman says: ‘She was paid $30 an hour to work four hours each week day — with breaks as she needed them and paid time off. She was repeatedly late, on the phone or didn’t show up, which is why she was ultimately let go with a month’s severance.’ 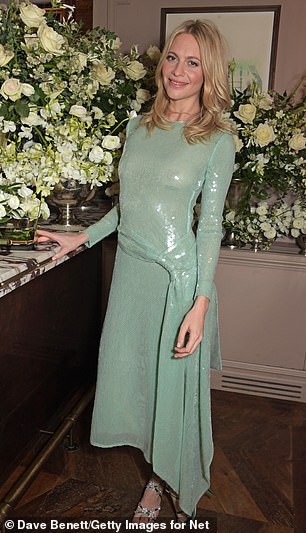 Poppy Delevingne starred in the latest series of Rivieria, the seductive South of France Sky Atlantic drama about billionaires who spend most of their time helping police with their inquiries.

Poppy Delevingne starred in the latest series of Rivieria, the seductive South of France Sky Atlantic drama about billionaires who spend most of their time helping police with their inquiries.

And her role as Daphne has evidently paid off.

Accounts for her modelling and acting services company, Poppy Delevingne Ltd, disclose that the 33-year-old has amassed £1.4 million in shareholders’ funds — double the £703,000 which it held last year.

Still, not quite in the same league as little sister, Cara, 27, with whom Poppy shares an LA house boasting a soundproof bunker with a mirrored ceiling and a stripper pole.

Cara’s fortune is estimated at £22 million. 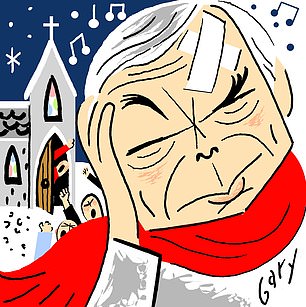 The Mastermind host is licking his wounds after an invitation to do a carol service reading went a bit Holby City.

‘On the way, I tripped on the Underground escalator and smashed my forehead against a metal step. When I got there, bruised and battered, the first to welcome me was a former Archbishop of Canterbury, who reminded me that when I’d interviewed him in his new job I’d been so aggressive he’d muttered, ‘What a nasty man’ afterwards — and it was broadcast to the nation.’

‘I’ve been taking CBD oil for my insomnia,’ the 41-year-old tells me at a party at the Serpentine Gallery. ‘It’s helped me so much. I’m sleeping better than I’ve ever slept.’

While some actresses are afraid to do more than witter about their latest role, Dame Emma Thompson has deeper things to relate.

The Oscar winner has revealed that she experienced the sensation of levitating after the sister of her husband, the actor Greg Wise, died. ‘Something interesting happened, which I haven’t said publicly before,’ she discloses.

‘It was a very hot day, the day she died. We were in the garden back at our place and I was lying on the grass and I suddenly had the sensation of being lifted on this wave. Literally like levitating on a wave of pure love.’

She adds: ‘It lasted for about 15 minutes and then it continued in a minor way in the days following. I wondered what it was. I interpreted it as my sister-in-law releasing all of the love she had for us and for the world. Because all of us humans are made of love, if only we can access it.’

In this egalitarian age, should women accept a drink from a stranger? Star Wars actress Daisy Ridley suggests she will let a man treat her — but only if he’s gay.

‘I went for tea at Claridge’s with my friend,’ she says. ‘And I went to pay the bill and these very nice gentlemen had already paid. They weren’t hitting on us — I think they were gay.’

‘For a while, I was wearing sunglasses on the Tube,’ she admits. ‘But then I thought, ‘Actually, no one’s looking’.’ 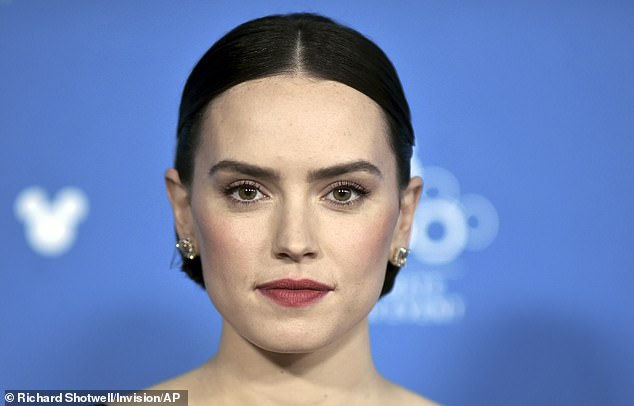 The former girlfriend of Freddie Mercury who was left the bulk of his multi-million pound fortune in his will, is trying to bottle the Queen star’s glamour.

A frustrated Bill Wyman walked out on the Rolling Stones after playing bass guitar with them for 30 years, but his wife, Suzanne, remains bosom buddies with Sir Mick Jagger’s ex-wife, Jerry Hall.

I spotted the pair dining at fashionable Chelsea restaurant Colbert this week.

Electric violinist Linzi Stoppard claims that female musicians are still not accorded the same respect as their male counterparts.

‘There are a lot of stereotypes,’ she tells me at a private view of art works by Norwegian artist Henrik Uldalen at the JD Malat Gallery in London’s Mayfair.

‘Women violin players are viewed in a more sexualised way.’

Linzi — who is married to film producer Will Stoppard, son of celebrated playwright Sir Tom — is now trying to pass on her music skills to her daughter.

‘I’ll be teaching her by the Suzuki method, in which you learn by ear.’

Cross-dressing potter Grayson Perry has given up visiting transvestite clubs because he’d become such a star attraction.

‘I don’t go to them any more because I don’t want to be pecked to death,’ he tells me at a CLIC Sargent Ambassadors fundraiser at the Nobu Berkeley in Mayfair.

The Turner Prize-winning ceramicist, 59, who’s married to psychotherapist Philippa Perry, adds: ‘People might have a go at me for not being the right kind of transvestite.

‘My version of transvestism is a sexual fetish.’ Lawks.