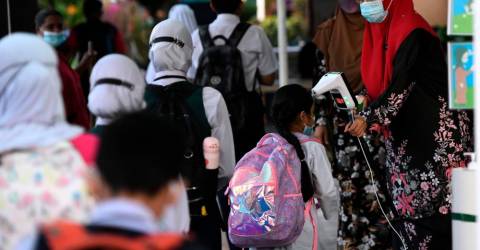 JOHOR BAHRU: The Education Ministry (MOE) has instructed the consultant involved in the design of Sekolah Menengah Kebangsaan (SMK) Seri Menanti in Muar, to conduct a detailed investigation and prepare a report on the roof collapse of one of the school’s block.

The ministry announced in a statement today that the investigation and report would also include the safety of roofing work in the adjacent block.

“The ministry and the Muar district Public Works Department (JKR) have also ordered the consultant and contractors to conduct immediate remedial work after a detailed investigation is conducted to ensure the blocks can be used for in-person teaching and learning (PdP) sessions,“ the statement read.

The ministry said they had conducted their investigation and found that the roof structure (which collapsed) was still under construction and had not been completely closed off.

“Strong winds during the incident that entered the half-opened roof structure turned out to be what caused the structural failure of the roof in Meranti block,” the ministry added.

The ministry said that work to upgrade the school roof and building maintenance as well as other related work at SMK Seri Menanti were carried out through a request for quotation (RFQ) by the Muar district JKR in accordance with existing procurement regulation.

Media outlets reported yesterday that the roof of a block in SMK Seri Menanti had collapsed and Muar MP Syed Saddiq Syed Abdul Rahman was reported to have said that the incident happened while school was in session and all students were having recess.