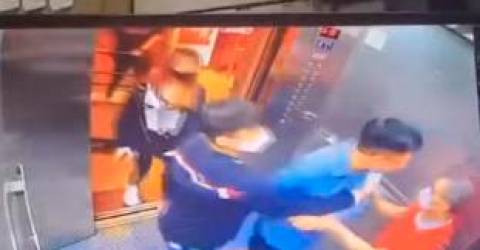 FOR anyone who has ever used an lift, it’s more or less accepted that sometimes, the doors will close before they are able to get inside.

Sometimes, the person inside may have pressed the ‘close’ button without seeing others approaching.

But have you ever became irrationally angry when it happens, to the point you feel the need to hurt the person inside for pressing the close button?

In Taiwan, that was what happened, when an elderly man accidentally pressed the ‘close’ button just as two men and a woman were trying to enter.

Due to the lift’s automated system, the doors re-opened, and the trio stepped inside, with one of the men then proceeding to physically and verbally bully the elderly man.

Though the incident occurred in early July, the CCTV footage from inside and outside the lift only recently went viral outside of Taiwan.

The bullying continued as the group exited the lift. At one point another man shows up to defend the elderly gentleman, and justice came swift with a barrage of kicks and punches right afterwards.

Not long after he shows up, the newcomer’s friends came down from the building’s upper levels and proceeded to assault the two bullies.

According to Taiwan News, the entire group – the ‘heroes’, the ‘bullies’, and the old man – were all taken in by the police for questioning, and news emerged that the suspects may be prosecuted for violating Taiwan’s Social Order Maintenance Act.

Though justice was served, in the end, no one won.