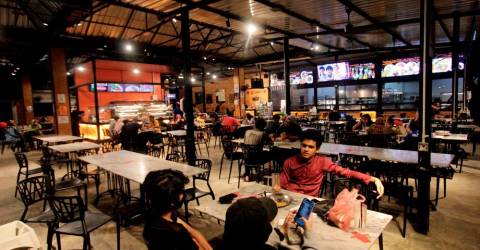 IN a recent FB post that went viral, a man who is an employee at a radio station shared his experience of encountering a particular old man while having supper with his family.

According to his Facebook post, he was at an eatery with his family at around 10:30pm. As he was waiting for his food to arrive, he saw an elderly man arranging plates, cups and even the chairs at the shop as if setting the table for a meal.

Once the food arrived, the man noticed that the old man was still alone, so he thought that maybe the old man was waiting for the arrival of his friends or staff, who were probably still on their way to the shop.

Curious, the admin said he then asked the waiter at the shop about the old man, and he was told the most heartbreaking story of all time.

The waiter explains that the old man is a frequent customer and would often come to the restaurant and order precisely eight meals and would always make a point to arrange everything neatly.

“The waiter said he was eating with his family. But they don’t know if they’re still around, or if they are gone (passed away).”