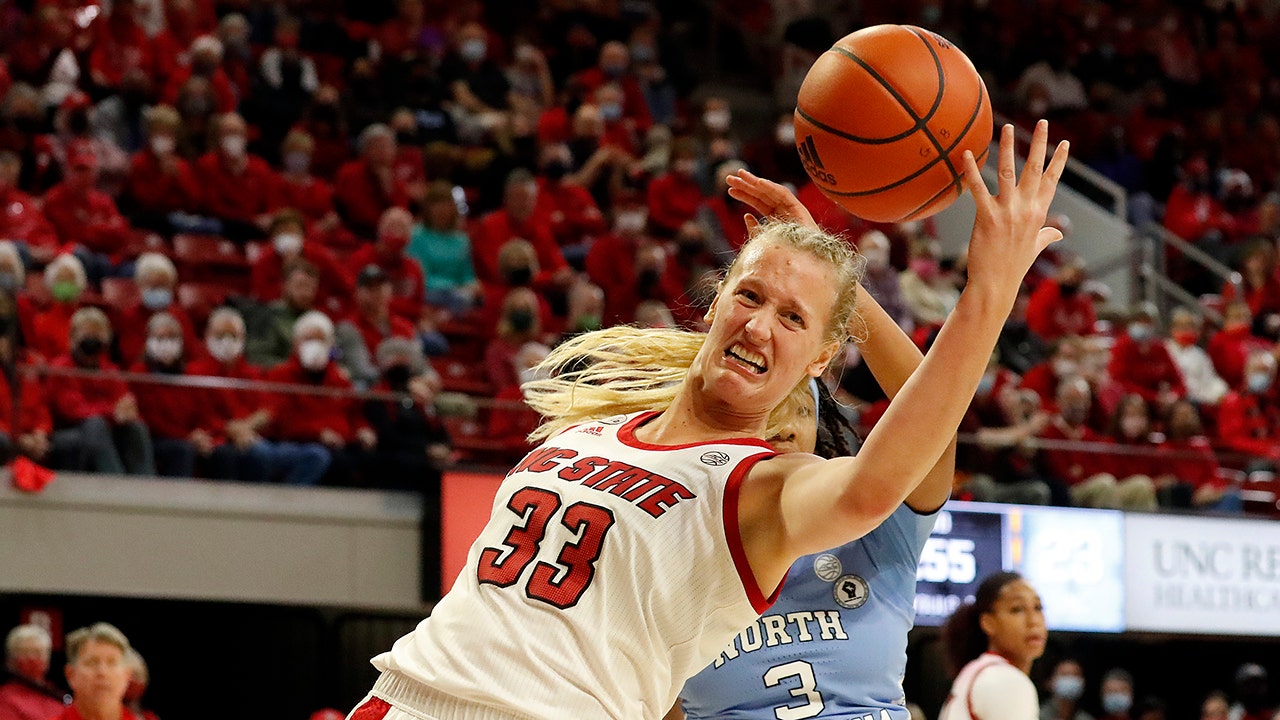 Wes Moore wanted more from his fifth-ranked North Carolina State team on defense, so much so that he was downright grumpy in practices before facing an unbeaten rival.

Considering the way the Wolfpack dominated the opening quarter, maybe he should stick to that approach.

N.C. State overwhelmed No. 19 North Carolina 72-45 on Thursday night, with leading scorer Elissa Cunane contributing 19 points and 13 rebounds. It was an impressive win that displayed the Wolfpack’s wealth of offensive options, its outside shooting and rebounding ability.

And oh yes, a defensive effort that locked up one of the nation’s best offenses, holding the Tar Heels to 23% shooting.

“I was probably too hard on them this week,” Moore said. “I felt bad about it and just felt like hopefully they could have the confidence to respond and have the urgency. That’s what’s great about having a veteran team. A lot of them don’t mind being coached a little bit.”

The rivalry had some extra zip this year, thanks to UNC’s rise under third-year coach Courtney Banghart. While N.C. State is the two-time reigning ACC champion, the Tar Heels entered as one of the last three unbeaten Division I women’s teams and ranked seventh nationally by averaging 83.1 points per game.

But the Wolfpack drained all drama early in this one, rolling to a 17-2 lead and leading by 24-7 after the opening quarter. The Tar Heels got no closer than a dozen again with an offensive effort that relied on Deja Kelly (21 points) and little else.

N.C. State forward Kayla Jones said it was a welcome effort after heavy defensive work in practice, with Moore all along being irritable — to use a nicer word than Moore offered to reporters.

“He was coaching us,” Jones said, shrugging it off. “He was just really intense all week. You’ve just to go to respond in a positive way.”

As for UNC, that opening quarter surprised Banghart, who said: “I told them: that wasn’t a team I recognize.”

“This is a pretty loose group. I mean, they travel with a boombox,” Banghart said. “I’ve got a pretty good read on them when you spend this much time with them. I don’t think they were nervous.

“To be honest, I think it was just when the going got tough, we backed down a little bit. We haven’t done that before.”

UNC: The Tar Heels had reason for confidence. This is the first season they have been ranked in the AP Top 25 since the 2015-16 preseason poll. They also had won the first of the two annual rivalry meetings in each of the past three seasons, all against top-10 Wolfpack teams. But UNC struggled early in front of a hostile sellout crowd and did little to keep the Wolfpack off the glass until the game was long decided. That combination made it pretty clear that No. 4 Arizona and Colorado would be the nation’s only unbeatens by the final horn.

N.C. State: The preseason league favorite illustrated some of its upside, with the Wolfpack having a seemingly endless well of options for offense and the ability to offset any shaky shooting efforts by calling another player’s number. That added UNC to the list of ranked teams beaten by the Wolfpack this season, joining No. 6 Indiana and No. 10 Maryland.

Cunane, the 6-foot-5 preseason ACC player of the year, found space to operate inside and had secured her double-double by early in the third quarter. She also thrived after years of tough, physical matchups with former UNC big Janelle Bailey inside.

Cunane had nine points and six rebounds in the opening quarter, and finished 6 of 8 from the floor.

In addition to Cunane, six players scored at least six points for the Wolfpack. … Jada Boyd had eight points, six boards and a block in 19 minutes off the bench for N.C. State. … Alyssa Ustby added 12 points and 12 rebounds for the Tar Heels. … Kelly shot just 8 for 24, but the rest of her teammates combined to make 7 of 41 shots (17%).

N.C. State: Another ranked opponent awaits the Wolfpack in Sunday’s trip to No. 20 Notre Dame.