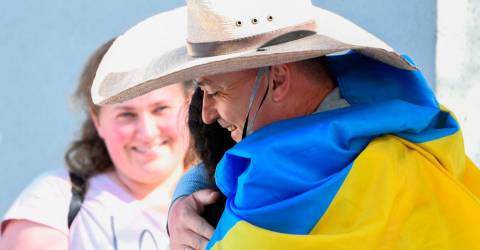 SAN YSIDRO: Oleksii Yeromin stands at the gate on the US-Mexico border and calls to Ukrainian migrants crossing into America after fleeing the war in their home country, then wraps them in a hug on the other side.

“Come here, come, you see this line? Here there’s the last checkpoint to go through and you will be in the United States,“ he said in English.

Wearing a hat and carrying a blue and yellow Ukrainian flag, the 43-year-old is the first face that many Ukrainians see as they cross into the United States.

He has even marked that final step for them, tracing the letters “USA” on the ground in red tape.

“Ukraine welcomed me, now Ukraine needed me here,“says Yeromin, who is originally from Uzbekistan and emigrated several years ago to Ukraine, where he married and had two daughters.

Five years ago he decided to go to Chicago to seek a better future. This week he was reunited with his wife and daughters at the US-Mexico border. They, too, had fled the war.

Family is everything, he said. “Any money, any house, anything’s doesn’t matter. It’s zero.” He is red-eyed — likely from the exhaustion of not having slept more than four hours a night for days now.

Even after welcoming his family, the painter by trade decided to stay at the gate.

“This is minimum. They travel long, they need a hug,“ he said.

His eldest daughter, Katarina, 13, does not speak English, but she helps out at the care center that has been set up as part of a massive volunteer operation.

“I’m very happy because I met my dad and also for helping here,“ says Katarina with the help of Gisele, her new friend and interpreter.

Soon, she is handing a phone battery to a young man and offering lollipops to a little girl.

“I’m very excited. I’m privileged, lucky. I needed to give back,“ adds the teenager with a shy smile.

“You made it, you’re here. Come here, come here,“ says Yeromin a few meters away, while giving out more hugs. – AFP