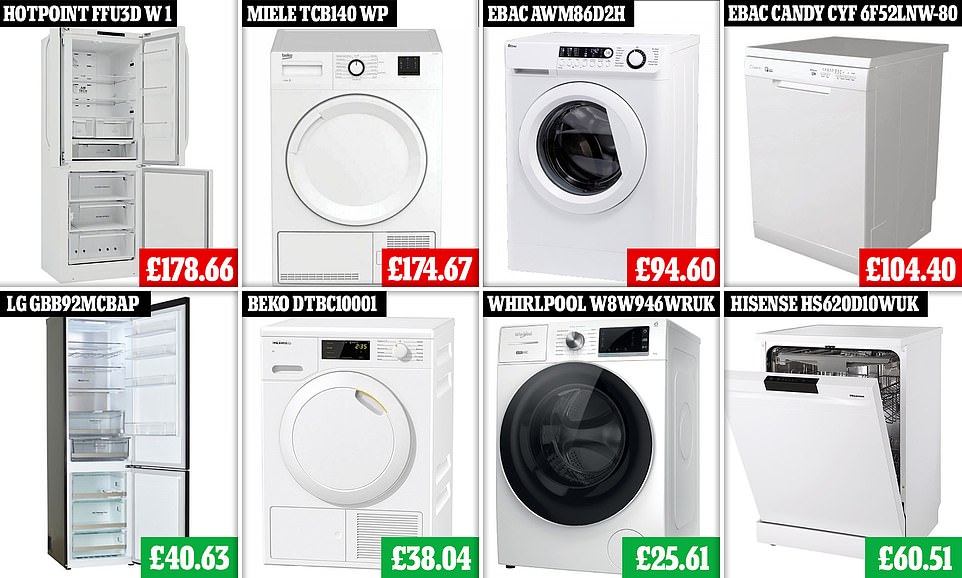 Energy-inefficient fridge-freezers will add over £130 a year to households’ bills, according to new research.

Consumer advice site Which? found the average total cost of running all white good appliances is set to rise by £77 a year following the energy price cap increase of April 1.

Households with energy-hungry models of white goods, however, face steeper rises in their bills.

The Hotpoint FFU3D or FFU3D X 1 fridge-freezers will cost £178.66 to run annually at the new price cap rate of 28p per kilowatt-hour.

That compares with a cost of just £40.63 for the most energy efficient fridge-freezer identified by the study – the LG GBB92MCBAP – leaving owners more than £130 better off relative to operators of the least efficient model.

Consumer advice site Which? found the average cost of running appliances is set to increase by £77 on average following the higher energy price cap rate which came into effect on April 1

Which? said: ‘Fridge-freezers are the most expensive appliance to run.

‘Yet our testing reveals that some use less than a quarter of the energy that others use.’

The research also examined the running costs of other white goods under the new higher energy price cap rate, comparing the four most popular models on the market.

In the washing machine department, the Ebac AWM86D2H and AWM74D2H models were found to cost £25.61 to run the cotton wash at 40°C four times a week over a year, comparing favourable with the Whirlpool W8W946WRUK which gobbles up four times as much energy and costs £94.60 annually.

Average annual energy bills have soared in Britain to £1,971 since April 1, following a 54 percent increase in the energy price cap.

Emily Seymour of Which? told The Telegraph: ‘If you are in the market for a new washing machine or fridge-freezer be sure to choose an energy efficient model.

‘You can cut energy consumption by avoiding small loads in your washing machine and dishwasher and not overfilling your fridge.

Revealed: How white goods with low price tags could end up costing consumers thousands of pounds extra in energy costs over their lifetimes

The energy price cap increase on 1 April took the unit rate to 28p per kWh from 21p per kWh – a 33 percent increase.

Consumer advice site Which? has published research, urging people in the market for white goods to look beyond the price tag plastered to the appliance – and to consider its lifetime running costs as well.

‘Low-cost’ white goods with low RRPs could present a false economy if they are energy inefficient, as they will hungrily suck up electricity and cause bills to balloon.

Paradoxically, sometimes the best deal is to pay more at the moment of purchase to get an energy efficient model that will consume less electricity over its lifetime.

However, Which? calculate that the LG GBB92MCBAP costs only £40.63 annually to run, compared with £178.66 for the two ‘cheaper’ Hotpoint models.

Assuming an 18 year lifespan for a fridge, buying the LG GBB92MCBAP implies a total cost over that period of £2,231.

The Hotpoint models, with a lower purchase price, have a lifetime cost of £3,766 – making their purchase a ‘false economy’ when compared with the LG GBB92MCBAP refrigerator, which has a purchase price three times as dear while still working out cheaper over its lifetime at £2,231

That compares with a far dearer estimate of £3,766 for the Hotpoint models, which sap up much more energy and take their toll on electricity bills.

Importantly, Which? ran their calculations based on current electricity costs – without even taking into account further energy cost increases going forwards.

Tumble dryers are often the most energy-intensive appliance, making it all the more important that consumers scrutinise the relative efficiencies of different models.

Regularly cleaning the lint filter can lower energy expenditure, but choosing an efficient model is the most important thing savvy shoppers can do to protect their purses. 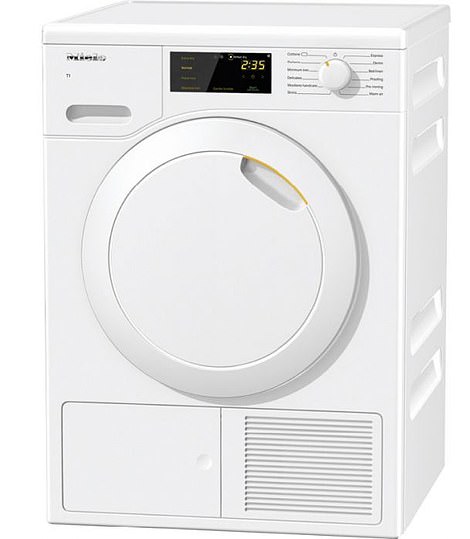 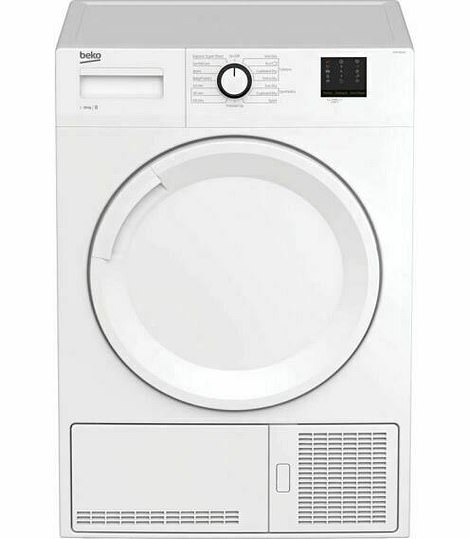 The Miele TCB140 WP and TSB143 WP models sell for £799, which may make price-sensitive consumers balk.

Less energy-efficient models, like the Beko DTBC10001, are priced at a much cheerier £300.

Once again, however, penny-pinchers would be caught out if they went with the smaller purchase price, because the lifetime cost of the Miele TCB140 WP and TSB143 WP models is £1,560 – assuming 20 years of usage and a per load cost of 24p.

Meanwhile, the ‘cheap’ Beko DTBC10001 gobbles up much more energy, landing owners with a total lifetime cost of £3,701, according to Which?, whose estimate assumes the dryer is used three times a week to dry three full loads of cottons.

Which? caution readers that, unlike in the case of many other appliances, ‘water use is critical in order for washing machines to do a good job’. 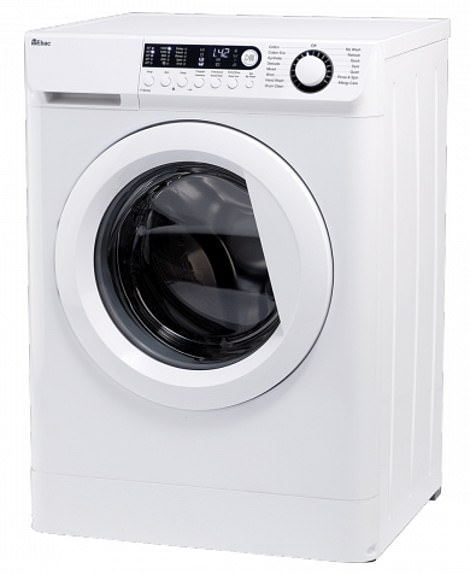 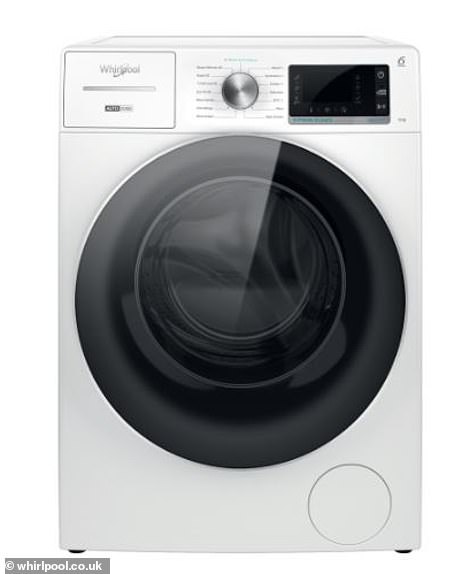 However, Which? recommend readers against going for the most energy-efficient model when washing machine shopping without first checking product reviews to ensure that ‘efficiency’ has not come at the expense of performance.

They can also be very sparing in their energy demands, depending on the model of the appliance.

The Hisense HS620D10WUK was the most energy-efficient model reviewed by Which?, costing only £60.51 to run annually. 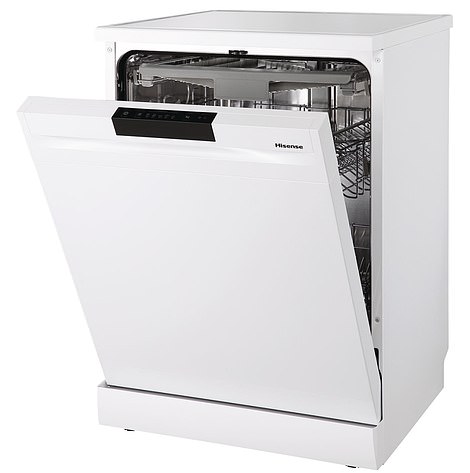 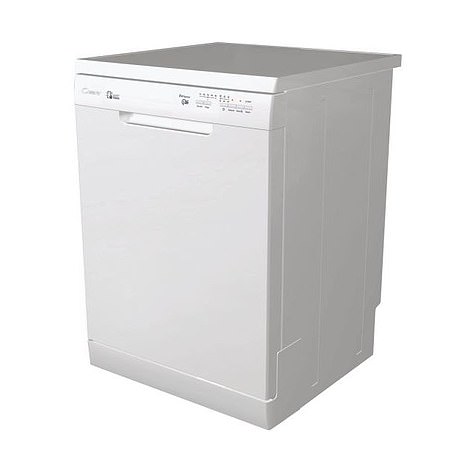 The most energy-hungry model, the Candy CYF 6F52LNW-80, sells for a cheaper £280, but has an operating cost of £104.40 annually, leaving owners out of pocket compared with those who bought the Hisense HS620D10WUK

That compares favourably with the most energy-hungry model, the Candy CYF 6F52LNW-80, which sells for a cheaper £280, but at an operating cost of £104.40 annually leaves owners £2,055 out of pocket over its 17-year lifespan.