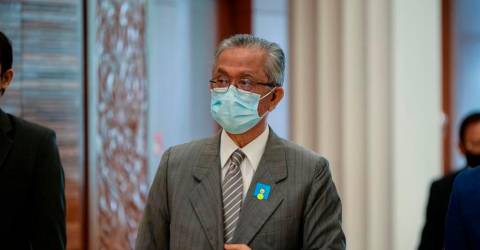 KUALA LUMPUR: The appointment of Malaysian ambassadors to foreign countries was made in a thorough vetting process based on diplomatic principles, said Deputy Foreign Minister, Datuk Kamaruddin Jaffar. (pix)

According to him, the appointment process also requires Malaysia to inform the particular country about the individual who will be appointed as an ambassador there, and then get that country’s approval.

“We have many processes to go through, where eventually, the instruments of appointment will be presented by the Yang di-Pertuan Agong (to those appointed as ambassadors),” he said when winding up the debate on the Supply Bill 2022 (Budget 2022) at the Committee level for the Foreign Ministry, in the Dewan Rakyat, today.

Responding to Wong Hon Wai (PH-Bukit Bendera) who wanted to know whether Pasir Salak Member of Parliament (MP), Datuk Seri Tajuddin Abdul Rahman, had been appointed as Malaysian Ambassador to Indonesia, Kamaruddin said the matter pertaining to the appointment of an ambassador could not be announced before it reaches the final stage.

Earlier, several opposition MPs, including Wong and Datuk Seri Salahuddin Ayub (PH-Pulai), raised the issue of the appointment of Malaysian ambassadors to foreign countries during the debate on the bill.

The estimated operating expenditure of RM760,304,100 allocated to the Foreign Ministry in the 2022 Budget was later approved.

A total of 15 MPs took part in the Budget 2022 debate session for the Foreign Ministry at the Committee level today, after the bill was passed at the policy level on Nov 18.

The debate and winding up for Budget 2022 at the Committee level will run until Dec 13.