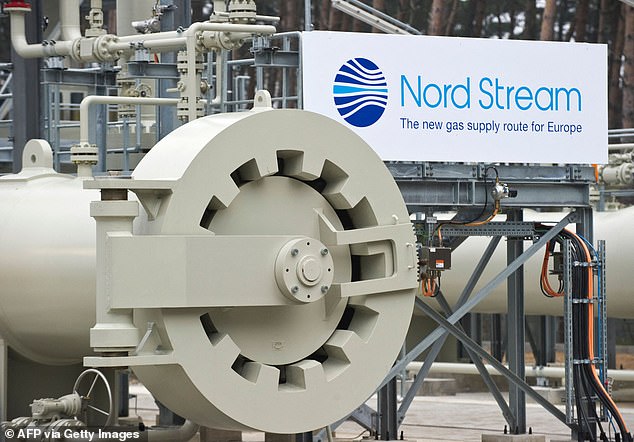 By John-paul Ford Rojas For The Daily Mail

The euro slumped to a 20-year low yesterday after Russia tightened its chokehold on gas supplies, deepening the continent’s energy crisis and adding to recession fears.

The single currency, which had already slipped to parity against the US dollar over the summer, fell below €0.99 for the first time in two decades.

Stock markets across Europe fell after the announcement that the Nord Stream 1 gas pipeline from Russia to Germany would remain closed.

Fuelling fears: Stock markets across Europe fell after the announcement that the Nord Stream 1 gas pipeline from Russia to Germany would remain closed

Kremlin-controlled Gazprom said on Friday that Nord Stream, which was due to reopen over the weekend after three days’ maintenance, would not do so due to a fault.

That pushed wholesale gas prices as much as 35 per cent higher on Monday – up 400 per cent on a year ago – adding to Europe’s headache over inflation, which is already at a record 9.1 per cent.

The need to keep a lid on spiralling prices means that despite the looming downturn, the European Central Bank looks set to announce a hefty 0.75 percentage-point interest rate hike later this week, adding to the pain for borrowers.

John Hardy, head of FX strategy at Saxo Bank, said the euro was falling despite the prospect of ECB action.

Goldman Sachs said it expected the euro to slide further to $0.97 and remain there for the next six months.

A monthly business survey by S&P Global suggested that the eurozone was heading for recession as the deepening cost of living crisis dissuades consumers from spending.