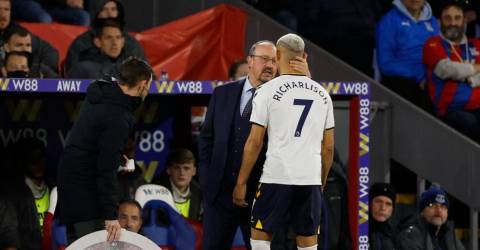 UNITED KINGDOM: Under-fire Everton manager Rafa Benitez said he does not have to explain every decision to fans after his move to substitute Brazilian forward Richarlison during Sunday’s 3-1 Premier League defeat at Crystal Palace was met with jeers.

Benitez said he took Richarlison off to avoid risking an injury ahead of a busy run of fixtures, though the 24-year-old looked less than pleased after being replaced by Salomon Rondon in the 58th minute.

“Richarlison has a problem in his calf, we knew that at halftime,“ Benitez told Sky Sports. “We were thinking about changing him but didn’t … We didn’t want him to get injured with so many games and he wasn’t affecting the game.

“But you can’t explain that all the time. I’m disappointed people don’t realise that you make the substitutions and they go well, as Rondon was a key player with the way he held the ball.”

Everton’s defeat at Selhurst Park was their seventh in nine league matches and heaped more pressure on Benitez, who faced the ire of fans earlier this month after a 4-1 home defeat by Liverpool. – Reuters