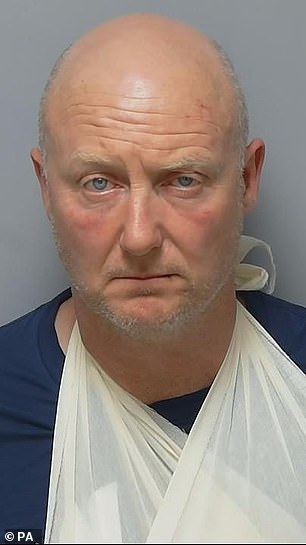 A football fan has been jailed for 20 months for punching a police horse during ‘ugly scenes’ ahead of a match between ‘intense’ football rivals Portsmouth and Southampton.

Former Ukip candidate Derek Jennings, 53, was sentenced at Portsmouth Crown Court after pleading guilty to violent disorder ahead of the match at Fratton Park on September 24 last year.

Judge William Ashworth also imposed a six-year football banning order and told the defendant: ‘You involved yourself in wide-scale violent disorder before a football game, there is only one appropriate punishment and that is immediate custody.’ 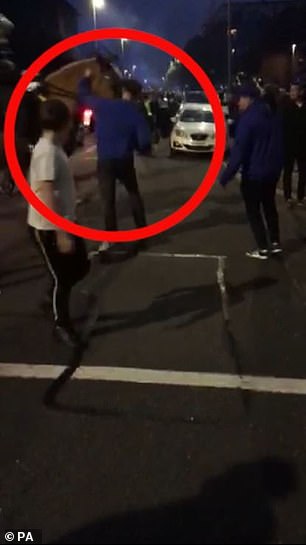 Simon Jones, prosecuting, said that 600 police officers had been deployed to the cup match between Portsmouth and Southampton – which he said was ‘one of the most intense rivalries in English football’.

He said that the father-of-two was part of a ‘baying mob’ of Portsmouth fans who crowded the streets awaiting the arrival of the 2,000 away fans.

The court was shown video footage of hundreds of fans from both sides confronting each other as the away fans were brought to the stadium.

Mr Jones said: ‘These are ugly scenes, these are groups intent on violence.’

He said that Jennings was first stopped by police two hours before the match and as he was drunk he was ordered to leave the area under dispersal powers.

Jennings returned to the area and was seen on the video footage shouting at the Southampton fans before he punched the police horse called Luna.

Mr Jones said: ‘Mr Jennings is heard shouting “Southampton c***”. He was told by the officer to move back, it is after that with clenched fist he swung a punch hitting the horse in the nose and mouth.

‘The horse shied away, Mr Jennings then swings out on two further occasions with the intention of punching the horse again, it is then he is pursued by the police and arrested.’

Mr Jones said that Jennings, from Portsmouth, told police that he had been drinking since 3pm, nearly four hours before the kick-off, and the defendant said: ‘I can’t believe that I swung at a horse and been so stupid.’

Mr Jones added: ‘He said his behaviour was disgraceful and he was sorry.’

Mr Jones said that Jennings had 14 previous convictions for 21 offences including an offence of affray in 1998 for which he was jailed for 18 months and given a five-year football banning order.