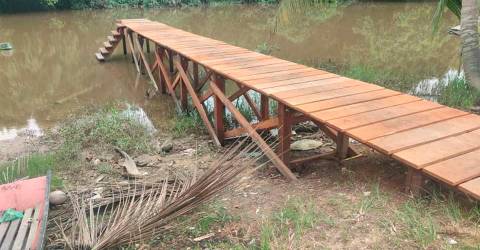 A posting by the Corporate Communication JKR Sarawak page on Facebook has caused a wide range of emotions among netizens over the weekend, and is being held as an example of exorbitant spending.

The posting showed a series of pictures of a recently completed jetty in Kampung Mutap.

The source of entertainment (or outrage) stemmed from the juxtaposition of the simple-looking wooden jetty and the cost it took to build, which was an eye-watering RM50,000.

Another picture that netizens also found particularly humourous was one showing a JKR worker and representatives from the contracting company posing beside the jetty, while giving a thumbs up.

One of the top comments on the post came from a user asking how many subcontractors were involved in the process.

Another sarcastically commented that others did not know that the quality of the wood used was very high, originating from trees that are able to resist a thousand years’ worth of heat and rain.

In a follow-up press release, JKR Sarawak explained that the cost of the jetty was due to the use of belian wood, which comes from a rare timber tree.