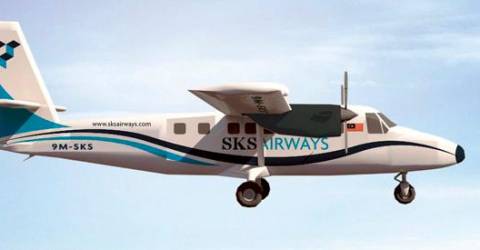 PETALING JAYA: While many do not expect it to soar, a new airline hopes to capture a niche market that has yet to be explored.

SKS Airways, which will be officially launched on Jan 25, will focus on servicing several islands around Malaysia.

A civil aviation expert theSun spoke to said the island-hopping strategy made “a lot of sense”.

The airline will fly to Pulau Pangkor, Pulau Redang and Pulau Tioman as soon as operations begin. It will also service Johor Baru and Subang.

SKS Airways director Datuk Rohman Ahmad said the airline will take off with four DHC6 Twin-Otters, each with a capacity of 19 passengers.

The emergence of the new airline has come as a surprise to many, given the significant drop in air travel as a result of the pandemic.

The civil aviation expert, who requested anonymity, agreed that it would be tough to make it a profitable venture.

“Don’t expect profits to start coming in overnight. The investors will have to be patient and willing to put in more money along the way before they start seeing profits.”

He added the investors would have carried out an in-depth study before they applied for a licence.

He agreed that servicing island resorts was a good strategy but the demand was not expected to be very high, given the current situation. Nonetheless, he said there is potential for growth.

“The use of the turboprop aircraft is also a good strategy, given their short take-off and landing capability.”

Most runways at island resort airports cater to such aircraft.

The expert expects the airline to work closely with tourism industry players to fill its seats.

Its air operator’s certificate was granted by the Civil Aviation Authority of Malaysia on Oct 1.

Rohman said Mavcom took three months to assess the airline’s business model before expressing its satisfaction and granting the ASL.

“But that is understandable given that it has a duty to protect not only passengers but also airlines.

“They would not want to see the airline being grounded after only three or six months of doing business.”

Rohman added SKS Airways had also been given a full service carrier licence similar to that awarded to AirAsia and Malindo.

He said the airline intends to expand its fleet and has purchased three ATR-72s, which will be used for cargo operations.

“We want to have a mixed fleet but have yet to decide on which other aircraft to buy.”

Rohman said the airline would have a three-tier fare system to meet individual passenger needs.

For instance, the fare from Subang to Pulau Pangkor starts at RM139.

The inaugural flight takes off a day after the launch for Pulau Pangkor, followed by the next flight on Jan 31 to Pulau Redang.

“We realise that some resorts on Tioman and Redang will close during the monsoon season but there are enough resorts open that will allow us to fly to those destinations,” he said, adding that SKS will slowly build up its routes.