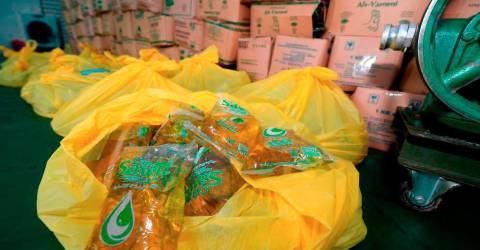 KUALA LUMPUR: Any export of cooking oil in the form of polybags will be stopped with immediate effect, said the chairman of the Special Task Force on Jihad Against Inflation, Tan Sri Annuar Musa.

He said the move was aimed at avoiding confusion with subsidised cooking oil which is also sold in polybags.

“When there are exporters who export cooking oil in a similar form, it creates problems for the enforcement officers.

“Therefore, any export of cooking oil in the form of polybags will no longer be allowed…must be exported in another form,” he said at a press conference, after chairing a meeting of the Special Task Force on Jihad Against Inflation, at the Parliament building here today.

Annuar said that the Ministry of Domestic Trade and Consumer Affairs (KPDNHEP) will consult with relevant parties, especially those that issue export licences for cooking oil in the form of polybags.

Regarding the protest demanding that the government address the increase in the price of goods on Saturday, as reported by the media, Annuar, who is also the Minister of Communications and Multimedia, said that most of the things demanded had actually been implemented by the government.

“From the information we received, there are five things mentioned about what they want, I don’t use the term what they demand, (but) what they want.

“I take that (the intention of the group) is good, and we read the five things one by one, and I found that for the most part (they) are things that have already been implemented (by the government), but may not be in their knowledge,” he said.

Therefore, Annuar said that his team will engage directly with the relevant leaders to share information and bridge the gap in understanding the inflation issue, in addition to being able to share opinions.

In addition, Annuar said the goal of the special task force is also to maintain Malaysia among the ASEAN countries which can provide basic necessities at the lowest prices and curb the increase in inflation to a controlled level.

“We don’t want to say that we can eliminate or stop inflation completely, as we can’t possibly do that because, as I said earlier, the inflation is due to external factors (outside the government’s control),” he said. — Bernama