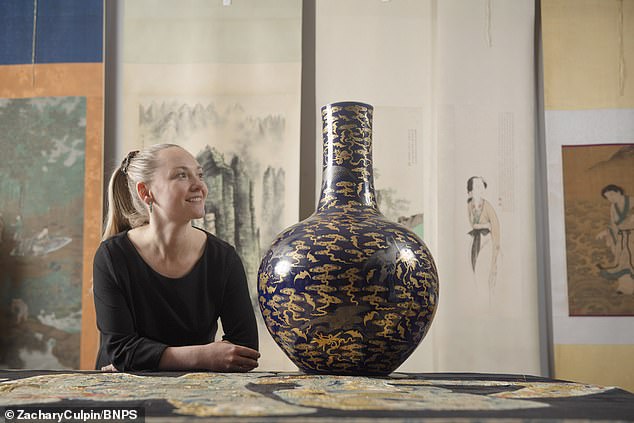 An ‘extremely rare’ 18th century Chinese vase which was kept in the kitchen of a family home for nearly four decades has been sold for £1.2 million.

The 2ft tall blue-glazed silver and gilt vase was bought by the owner’s late father, who was a surgeon, in the 1980s just because he found it attractive.

Initially, its value was not known and it was stored in the kitchen at the family home in the Midlands.

But the vase, which has a crack in its neck and is decorated with cranes and bats, was moved to a safer spot in the dining room after an antiques expert spotted it during a social visit.

Years later the same expert identified the Chinese emperor Qianlong’s six character seal mark on its base and said it was likely displayed in the halls of the Qing palace in the mid-18th century.

The vase was bought by the father of its former owner who didn’t know how much it was worth. Pictured is Francesca Whitham from Dreweatts with the vase 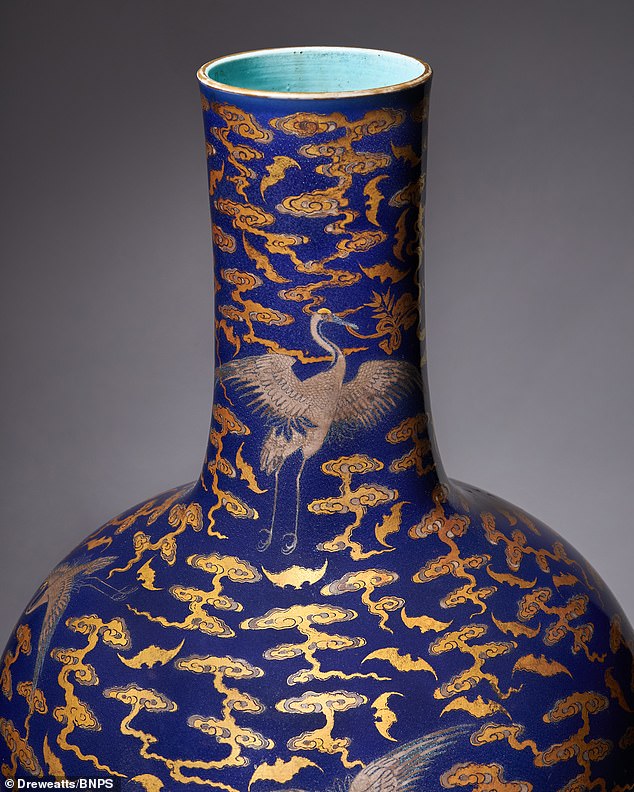 The 2ft-tall cobalt blue vase is enamelled in bright gold and silver and was expected to go for £150,000, but instead went for £1.2million 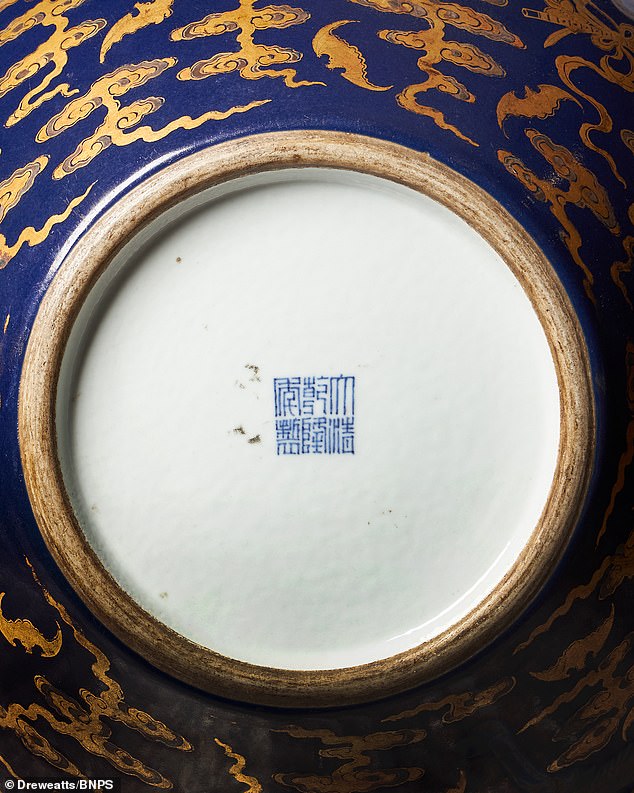 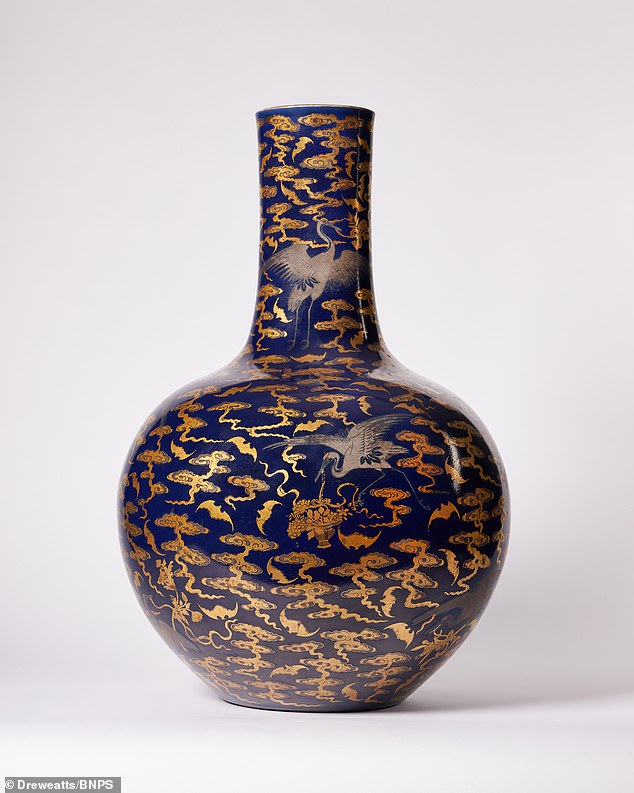 The vase had been bought in the 1980s by the seller’s father for a couple of hundred pounds, with no idea as to its true worth

The owner put it up for sale with auctioneers Dreweatts, of Newbury, Berkshire.

It was given a conservative estimate of £100,000 to £150,000 but interest in it by the super-rich Chinese eager to buy back their lost heritage saw it sell for a hammer price of £1.2m.

With fees added on the winning bidder, an anonymous international buyer, paid £1,449,000 for it.

Mark Newstead, a specialist consultant in Asian ceramic art at Dreweatts, said: ‘I was at the house with my wife for lunch in the 1990s.

‘I was surprised to see the vase in the kitchen and said ‘I think that’s something rather good’ but didn’t pick it up or inspect it as that wouldn’t have been appropriate.

‘I saw it again some years later and had a proper look and it seemed more promising. It had been moved to a safer spot on a mahogany sideboard, well set back from the edge. 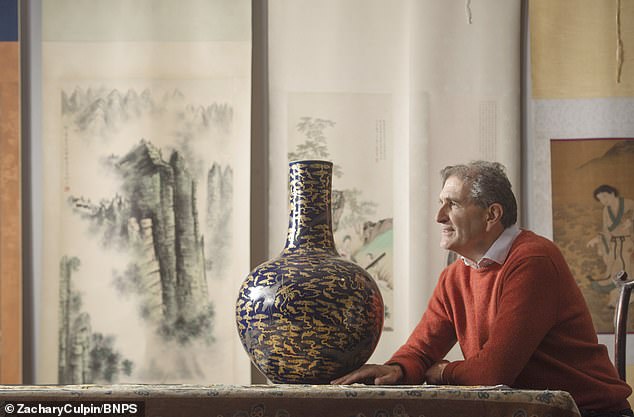 The vase was originally spotted by an antique expert during a social visit. Mark Newstead, specialist consultant at Dreweatts for Asian Ceramics and Works of Art, pictured with the vase

‘The surgeon bought it just as a decorative thing. We do not have a receipt but the daughter is reasonably certain he bought it sometime between 1988 and 1993.

‘He had a good eye. At the time the Chinese weren’t really a force in the market so you could find things for a relatively modest price – although this was still a great find.

‘The principle interest in the 1980s was earlier ceramics. The owner didn’t think it was anything important, he just bought it because he loved it. 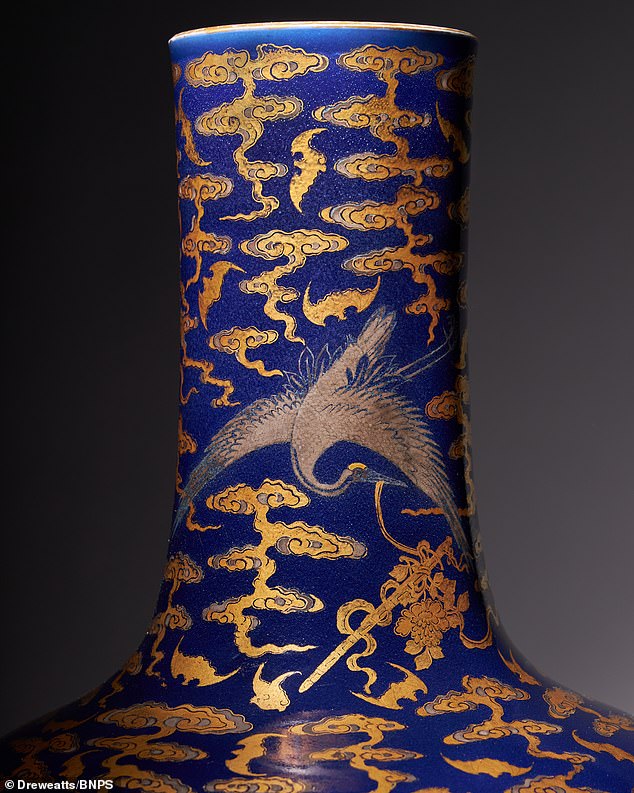 The ornate vase features flying cranes and bats, which are meant to signify longevity and prosperity

‘The technique of gold and silver is very rare. There are other examples but none with this design.

‘We kept the estimate low but had a lot of interest leading up to the sale from China, Hong Kong, America and the UK.

‘We are delighted with the result. It shows the demand for the finest porcelain produced in the world. It is a fabulous result and we are privileged to have sold it.’ 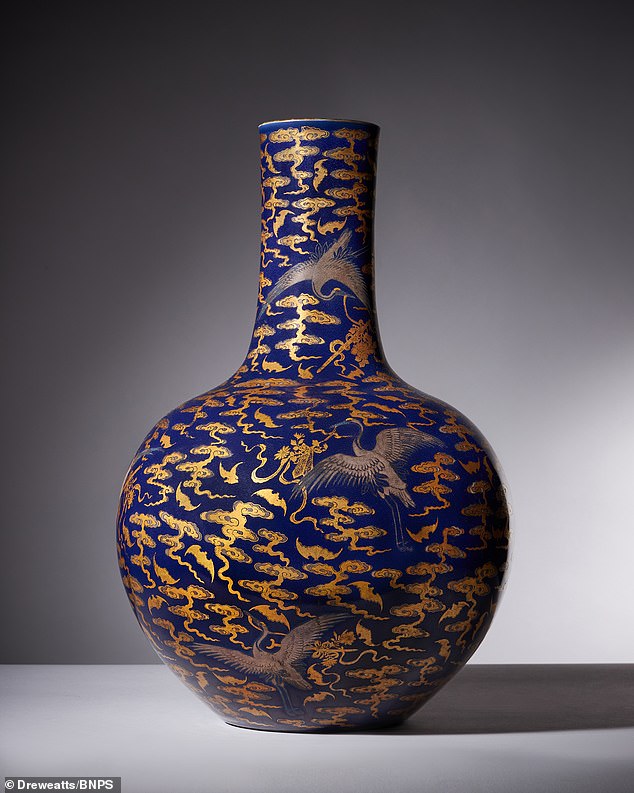 The cobalt blue vase is delicately enamelled in gold and silver and has emblems for the ‘eight immortals’ associated with Daoism as well as flying cranes and bats which symbolise longevity and prosperity.

Dreweatts said no other porcelain decorated with the same subject in gold and silver appears to have ever been documented before and the vase was of exceptional quality.

Qianlong was the fourth emperor of the Qing dynasry and ruled from 1736 to 1795.