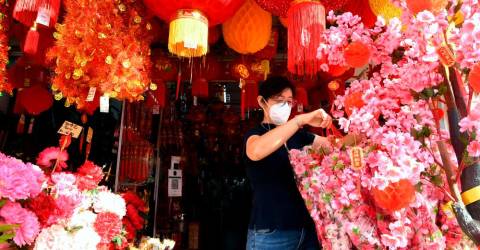 Unlike last year where the reunion dinner was limited to only 15 family members living within a 10 km radius, the reunion dinner scheduled to take place on Jan 31 is allowed to involve as many relatives and members of the family.

CNY receptions, on the other hand, are allowed but limited to invited guests only, with a number not exceeding 50 per cent of the space capacity.

CNY receptions organised by companies or associations must be held in a hall or a restaurant and not in the open or over a long period of time like open houses, she told a joint press conference on the SOPs for CNY 2022 with Transport Minister Datuk Seri Dr Wee Ka Siong here today.

Halimah said prayers at temples are also allowed on Feb 1 and 2 in full compliance with the SOPs under Phase Four of the National Recovery Plan, while the special night prayers for ‘Hokkien Clan’ on Feb 8 and 9 and other religious activities were only allowed in the compound of their respective houses.

The Chap Goh Mei prayers at temples on Feb 15 are allowed in accordance with the SOPs, she said.

Also allowed are the lion and dragon dances, subject to the SOPs set by the creative industry.

“The SOPs are prepared for the safety of the people and those celebrating the CNY,” she added.

Meanwhile, Wee said the SOPs for this year’s CNY had clearly been more relaxed than last year.

“It has been discussed in detail in three meetings involving numerous stakeholders,” he said.

Wee, who is also MCA president said the party would organise a CNY reception this year, but only involving a limited number of guests.

The details on the reception would be announced by MCA secretary-general Datuk Chong Sin Woon later, he said, adding that the party would comply with the SOPs so as to give a good example to others. – Bernama