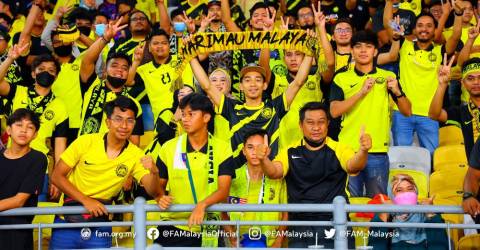 KUALA LUMPUR: Malaysians once again flocked to the National Stadium in Bukit Jalil here today to support the national football team, who are on the verge of creating history by qualifying for the 2023 Asian Cup finals.

The Harimau Malaya squad, coached by Kim Pan Gon, ranked 154th in the world, will take on world 188th Bangladesh in their last Group E match of the 2023 Asian Cup qualifiers scheduled to kick off at 9 pm tonight.

Malaysians continue to arrive at the stadium in droves, turning the stadium grounds into a sea of yellow and black as of 6.30 pm.

Pockets of Bangladesh supporters, however, could be spotted scattered throughout the grounds, adding to the carnival-like atmosphere with their cheers and songs, accompanied by the shrill loud distinct trumpeting of vuvuzelas.

An estimated 50,000 spectators will fill the stadium tonight, with 44,340 tickets having been confirmed sold as of 6 pm.

The National Stadium has been opened to spectators earlier in the day to accommodate the other match between Bahrain and Turkmenistan that began at 5.15 pm.

The nearby Bukit Jalil LRT station was also once again jammed packed with spectators who have chosen to use public transport.

After playing two matches, Malaysia needs to win tonight in their final match for a chance to end the 40-year-old wait to qualify for the 2023 Asian Cup finals based on merit, having last done so in 1980 in Kuwait.

Bangladesh, however, has no chance of qualifying for the finals, having lost both their previous two matches.-Bernama