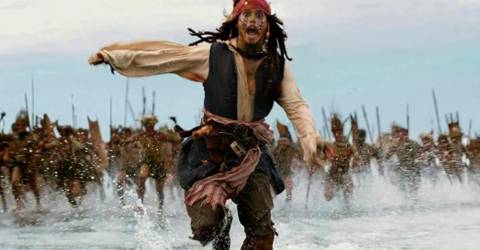 AFTER Johnny Depp and Amber Heard’s defamation trial, fans have been wondering if Depp will return to reprise the role of Captain Jack Sparrow as the loss of his role in the Pirates of the Carribean franchise was the core to the entire case.

Besides that, Depp was also recast for the role of Grindelwald in the latest Fantastic Beasts film series after he lost his libel case against the UK tabloid The Sun.

Recently, PopTopic reported that Disney has allegedly offered Johnny Depp a deal for him to return as Jack Sparrow in another Pirates production.

According to the insider: “Disney is very interested in patching up their relationship with Johnny Depp,” and “reached out to the actor prior to his defamation trial”.

It’s been almost four years since the actor parted ways with Disney, but the source alleged that “the studio has already penned up a draft for a film” and “they are very hopeful that Johnny will forgive them and return as his iconic character.”

However, before Depp fans get too excited, Pirates producer Jerry Bruckheimer, told The Sunday Times that the actor was not being considered at this point and that the future of the series was undecided and according to E! News, a representative for the actor told NBC News that “this is made up.”

In addition, during his trial against Heard, her attorney Ben Rottenborn asked the actor: “If Disney came to you with US$300 million (RM1.3 billion) and a million alpacas, nothing on this earth would get you to go back and work with Disney on a Pirates of the Caribbean film? Correct?” to which Depp replied: “That is true, Mr. Rottenborn.”

For now, Depp is focusing on his music as he reunites with his bandmates The Hollywood Vampires (Alice Cooper, Joe Perry and Tommy Henriksen) for their tour set for next year.