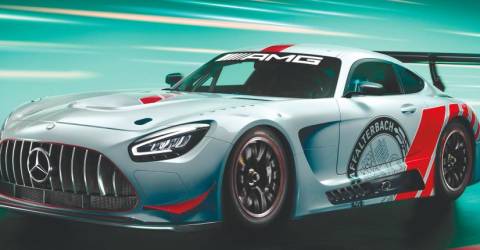 FOR ITS 55th anniversary this year, AMG has been celebrating in various ways and one more is the production of the Mercedes-AMG GT3 Edition 55.

This will be a very exclusive edition because there will be only 5 units in the world, so it will be a much-coveted collectors’ model.

To guarantee and to document the minimal production run, a specific range of numbers (GT3.190-55) was created for the chassis numbers of the cars. Each car will have an ex-factory price of €625,000 (RM2.8m).

While this has a GT3 designation, it is not FIA-homologated so it is not subject to the stringent regulations of the racing class.

This has allowed the engineers at AMG to raise the power output of the AMG 6.3-litre V8 engine to 650bhp, around 100bhp more than in the homologated version that can be used for racing.

Appropriately, the performance exhaust system made of Inconel comes without a silencer, generating an even more characteristic sound pattern as a result.

Maximum exclusivity is also assured as the colour is a special finish in Manufaktur alpine grey uni with red accents.

The Affalterbach crest has been painted on the doors, while next to the AMG logo, the 55-year anniversary logo can also be seen on the rear wing.

In the functional racing cockpit, the GT3 Edition 55 has exclusive details such as the anniversary symbol on the seat embroidery and plaques with “Edition 55 – 1 of 5” inscription can be found on the centre console and the carbonfibre seat.

The matte Anthracite metallic is characteristic for the AMG interior with the high-quality visible carbonfibre elements harmoniously blending in, from the door sills, door covers and centre console to the dashboard. Another exclusive feature in the interior are the seatbelts with silver accents.

As a technical highlight, the cockpit of the includes a Data Display Unit (DDU) of the latest generation. The Bosch DDU 11 has a high-resolution graphic display that shows relevant information like speed, engine speed, operating temperatures, lap times, gear and shift indication, among others. The 55-year anniversary logo makes its appearance each time the car is started.

While AMG is in the Mercedes-Benz Group today, it began life as an independent company 55 years ago. It was founded by two former employees of Mercedes-Benz.

With their knowledge and experience of the products, they began to offer tuning services to make the engines in the cars more powerful.

The performance was impressive and thereafter, AMG was sought after for its expertise in tuning.

Not surprisingly, their achievements on the racetracks caught the attention of Mercedes-Benz, which began to develop a closer relationship from 1990.

In another development the same year, the German patent office recognized AMG as a trademark as the name was now so well known.

In 2005, Mercedes-Benz took on a major share in AMG to create the Mercedes-AMG subsidiary, opening the door to a much wider scope of business.

With its roots in motorsport, the Mercedes-AMG brand has been at home on the racetrack for decades. The high-performance brand also has a presence in Formula 1.

Today, the Mercedes-AMG model range is larger and more varied than ever before and includes SUVs. The brand is also electrifying and bringing new levels of performance to electric vehicles.

However, Mercedes-AMG now offers a something close to a F1 car that can be used on the road.

It will soon offer the Mercedes-AMG One, an exclusive hypercar with F1 technology that only 275 people will get to own.