A father whose son was stillborn at 41 weeks has launched a support group for dads after noticing the availability of care for bereaved men didn’t match that of mums.

Lee Chatterley, 28, from Manchester, lost his son Charlie on October 3, 2013 due to cord compression.

Although the devastated couple received a great deal of sympathy, Lee couldn’t help but feel the majority of the help on offer was tailored towards women – in this case his wife Hannah.

He found groups on social media dedicated to bereaved parents alienated dads, with members frequently sharing posts beginning with ‘Hello Mummies’, so in 2014 he started up his own page, Charlie’s Child Loss, which now has over 500 members.

Lee, a support worker, explained how during the grieving process he didn’t want to burden Hannah with his own pain as she too was struggling to cope with their loss.

Lee Chatterley, 28, and his wife Hannah, from Manchester, lost their son Charlie (pictured) in 2013 and has since started a support group for grieving men 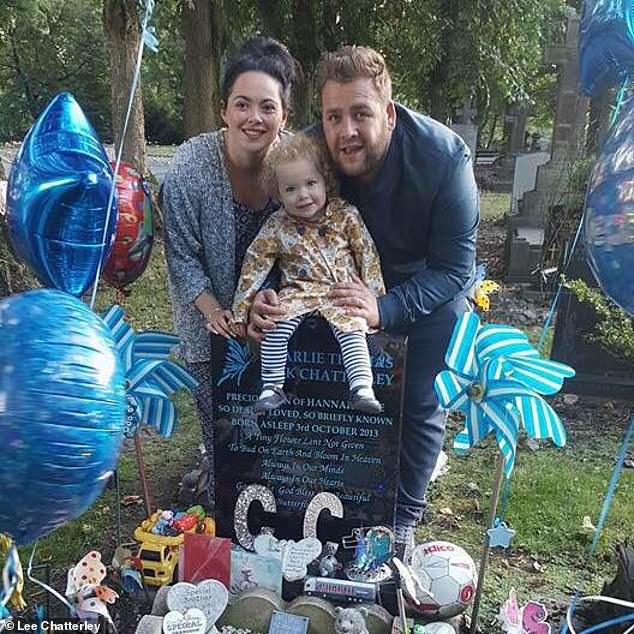 Support worker Lee, pictured at Charlie’s grave with Hannah, 26, and daughter Poppy, four, said he felt like most help was aimed at mothers after his son died

He said: ‘Hannah was in labour for 23 hours after we were told they couldn’t find a heartbeat. When Charlie was born, weighing 8lbs 2oz, he looked like he was sleeping.

‘I let it all build up and up and I wasn’t in a good place. Eventually I ended going up on anti-depressants.

‘Perhaps if I had opened up then I wouldn’t be on the tablets for the rest of my life.’

A few weeks after Charlie’s death, Hannah suggested to her husband that he joined some support groups on Facebook, as she was finding comfort in them herself.

But Lee said he didn’t find them overly helpful as he felt they were mainly aimed at mums. 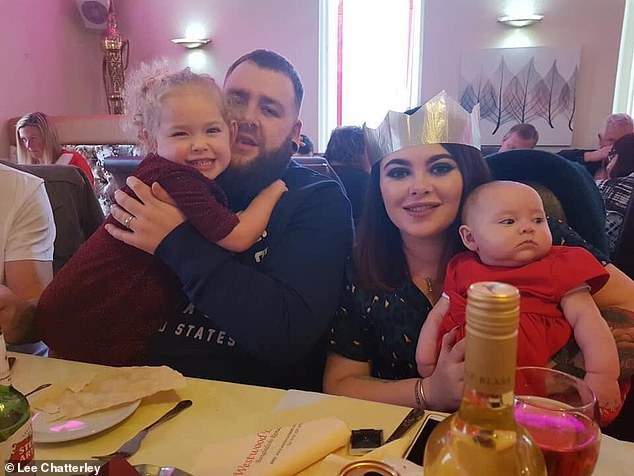 In the months after Charlie was stillborn, Lee kept his emotions to himself as he didn’t want to ‘put his grief on top’ of his wife’s. Pictured are Lee and Hannah with their daughters Poppy and Ivy, who is seven months old 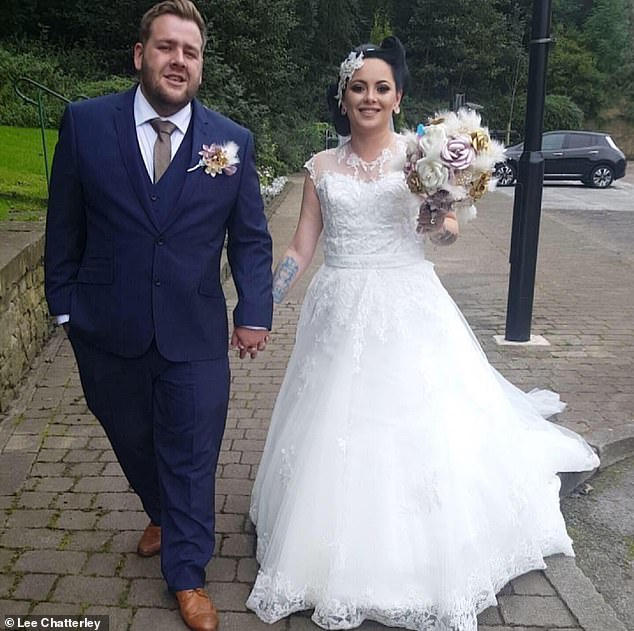 Hannah, pictured on her wedding day to Lee, recommended her husband joined support groups online, but he didn’t find them that useful. He started his own Facebook group in 2014

He said: ‘Lots of them would post a status in the morning and it would start with, “Hello mummies”. It just didn’t help with my own grief as a father.’

Hannah then suggested that Lee start his own group, and in 2014 Charlie’s Child Loss was formed on Facebook.

Straight away Lee had 20 requests from men to join the group, which is also catered towards grieving uncles, brothers and grandfathers.

Lee said: ‘We have 526 members now and it has become a safe space for men to talk about loss and know they’re not alone.

‘But it’s not all doom and gloom. We talk about other things like sports or what we’ve had for tea. It’s about knowing there’s someone there to talk too.’

As well as the dozens of UK-based men from places like Bristol, Hull and London, men from as far afield as Canada and Mexico have also signed up. 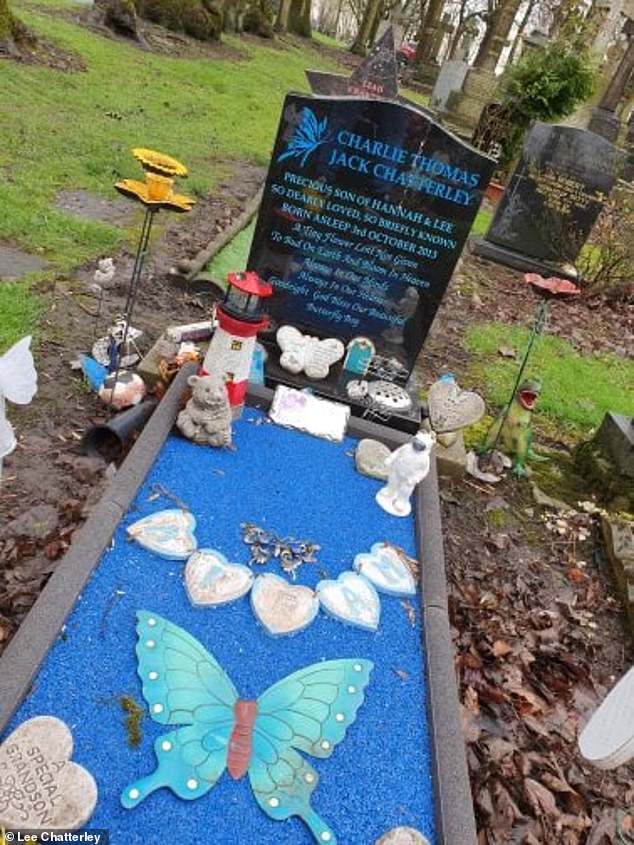 Lee said running his page Charlie’s Child Loss has really helped with his grief. There are now more than 500 people in the group. Pictured is Charlie’s grave

Lee said: ‘The fellas in the group don’t realise how much they’ve helped me and changed my life.

‘Hannah and I always get messages on Facebook from the guys and their wives saying “thank you”, but we should be thanking them.

‘It’s not just dads with stillborn children on the group. There’s a man whose girlfriend had a six-week miscarriage and even a dad whose child died at 40 years old.’

Lee added that sometimes it’s easier to chat with others who have been in a similar situation and just wants men to realise ‘they don’t always have to be the strong one’.

He added that he never imagined his site would take off like it has, but it goes to show there is a real need for male-focused support groups. 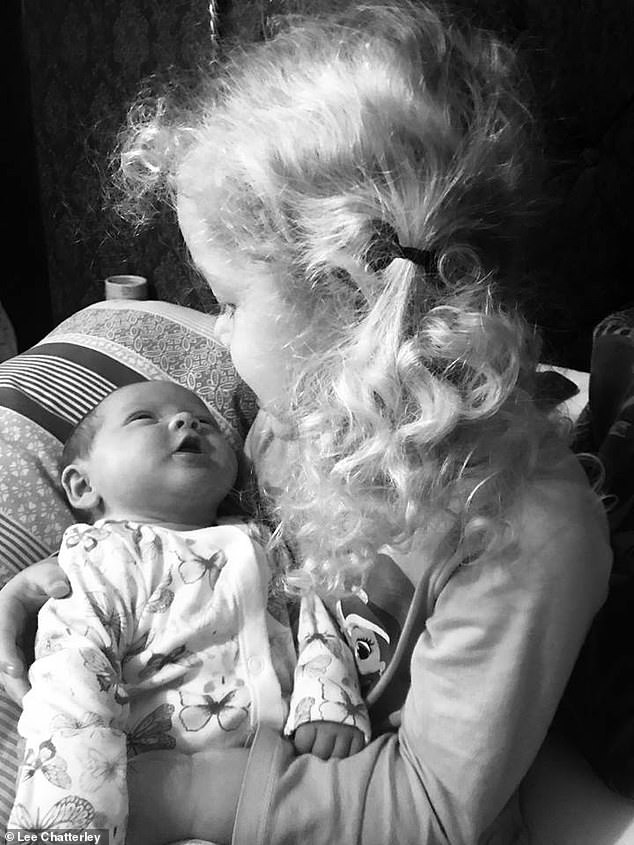 Lee and Hannah now have two daughters, pictured, who they tell about Charlie everyday

Now a father to daughters Poppy, four, and seven-month-old Ivy, Lee said he wants to keep spreading his message and continue talking about his son.

He said: ‘I could talk about Charlie all day. We take the girls to visit his grave and Poppy knows everything about him and that she has a big brother in heaven.

‘We’ve applied for charity status now and will be running regular meetings for guys to talk in person over a tea, coffee or beer.’