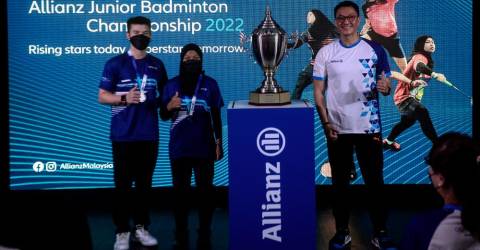 KUALA LUMPUR: The 20th Malaysia Games (Sukma) will be the best preparation for national junior shuttler Muhammad Fazriq Mohamad Razif in his mission to win the gold at the 2022 World Junior Badminton Championship in Santander, Spain from Oct 24 to 30.

The 18-year-old said he was determined to do his best as it would be the first time he was competing in the championship and ironically his last as he would have exceeded the age limit in the next edition.

“I think this Sukma is the best warm up for the World Junior Badminton Championship as I will be playing the doubles in both championships but my partner has not yet been determined by the coaches yet.

“Because this will be my last time in the World Junior, I want to fight to ensure that I’m champion together with my partner,” he told reporters at the launch of the Allianz Junior Badminton Championship (AJBC) in Sports Arena Puchong here today.

He also said his current focus was to improve his game after being slotted to train with the national senior squad under Badminton Association of Malaysia (BAM) doubles coaching director Rexy Mainaky beginning July 18.

Muhammad Fazriq admitted that he was still finding his rhythm to adapt to the current situation as things were different for him in the junior squad.

“I feel training at the senior level is harder and tougher but it makes my spirting stronger as I want to be a good player in the future,” he said.

Meanwhile national women’s singles player Siti Nurshuhaini Azman, 18, said she and her compatriots were adapting to the new training regime under James Chua, who officially reported for duty last Monday.

“Coach James just got in this week, so all of us are in the process of adapting to the training but I’m sure he will bring changes to our game to make it more mature,” she said.

Siti Nurshuhaini added that her current focus was to improve on her physical condition to play well when she represents Selangor in Sukma, but she was still unsure if she will be representing Malaysia at the 2022 World Junior Badminton Championship. – Bernama