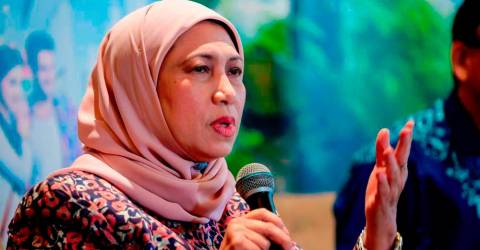 She said the Social Welfare Department (JKM) had conducted a study on the scheme and the pilot project was also implemented in several states for six months in 2021.

“Now we are waiting for the report because we want to know which is better for users.

“If more people prefer cash payments, there will be no problem to revert (to the old method), but it will take time because there is a certain system that needs to be followed,” she told reporters after delivering the New Year 2023 Message to the ministry’s members here today.

Nancy was commenting on the suggestion by OKU Sentral president Senator Datuk Ras Adiba Radzi yesterday to scrap the implementation of JKMPay as it is difficult for recipients to make purchases using the methods involved.

Through JKMPay, 50 per cent of the total cash aid will be deposited to the recipient’s Bank Islam account, while the balance will be credited to the JKMPay card.

Prior to this, several Persons with Disabilities (PwD) associations had also submitted a memorandum to the ministry urging for JKMPay to be abolished as it caused inconvenience to the group. – Bernama